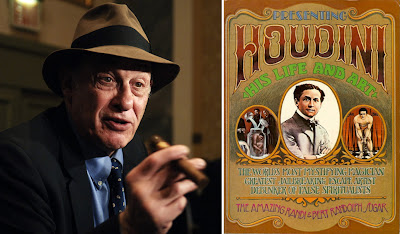 Sportswriter and boxing maven Burt Randolph Sugar, who co-authored the book Houdini His Life and Art with James The Amazing Randi, died on Sunday in Mount Kisco, NY at age 75.

First published as a paperback in 1976, Houdini His Life and Art was one of four coffee table sized Houdini books released to celebrate the 50th Anniversary of Houdini's death. It's actually an excellent book, under-rated as a biography, with sores of rare photographs. It was released as a hardcover in 1977 and has not been reprinted since. The copyright page shows Sugar as the sole copyright owner.

Thanks to Kevin Connolly at Houdini Himself for the alert.
Written by John Cox at 10:09 AM