Teller introduces new edition of 'The Right Way To Do Wrong' 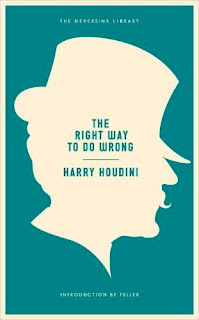 A new paperback edition of Houdini's first book, The Right Way To Do Wrong, will be released as part of "The Neversink Library" on October 30, 2012.

First published in 1906, this book has long been in the public domain and there have been numerous reprints. Normally I pass on these, but according to the cover art just revealed on Amazon, Teller of the great magic duo Penn & Teller has written an introduction for this new edition. That definitely makes this one worth adding to the collection!

Pre-order The Right Way to Do Wrong (Neversink) at Amazon.com.
Written by John Cox at 7:22 AM

Email ThisBlogThis!Share to TwitterShare to FacebookShare to Pinterest
Tags: Books, Books by Houdini, Books: Methods, Methods, Other magicians, Penn and Teller, The Right Way To Do Wrong, Writings