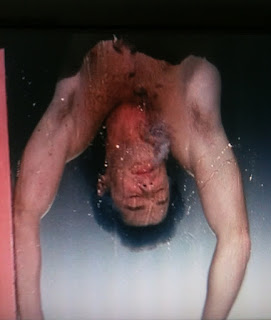 Nowadays most people seem to know that Houdini didn't die in his Water Torture Cell. Most are now aware of the dressing room punch, and even those who still think the punch lead to him becoming trapped in the cell are open to hearing the truth.

But let me tell you, this was not case in the 1970s, especially in 1976 when there was a renaissance of interest in Houdini with the 50th anniversary of his death. As a young "Houdini Enthusiast", I can't tell you how many times I had to argue that Houdini didn't die in the USD, and how I was generally disbelieved (even once by a teacher). After all, they had seen it in a movie!

Of course, they were right about that. They had seen it in a movie. The myth of Houdini drowning in his Water Torture Cell (or the "Pagoda Torture Cell", as the movie called it) was born of the 1953 film, Houdini, starring Tony Curtis and Janet Leigh. Why the filmmakers decided to give Houdini such a dramatic and wildly inaccurate death is unknown, but it might have been rooted in Harry Cohn's early complaint that the Houdini story "lacked romance and needed a better ending than a punch in the solar plexus." Paramount gave it both.

It didn't help that the 1976 TV movie, The Great Houdinis, also depicted Houdini failing to escape from the cell, but at least they hedged with a freeze frame and voice over stating that he died in Grace Hospital.

However, Hollywood isn't completely to blame. Magicians at the time freely traded on the misconception of Houdini's death. Below are two adverts from 1976 -- one for Charlie Myrick and the other for the great Steve Baker -- that flat out say Houdini died in the Water Torture Cell. I believe even Doug Henning alluded to this during his famous first NBC special. 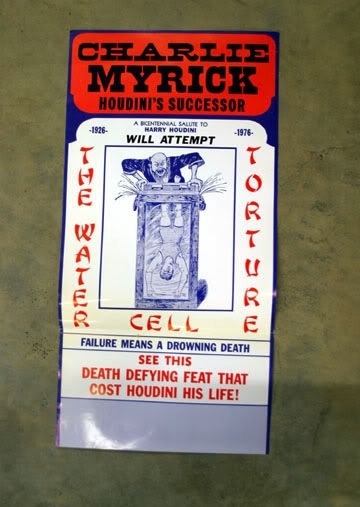 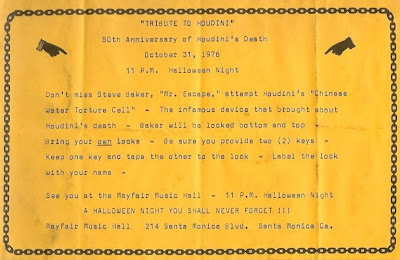 But, as I said, the myth of Houdini's drowning death is much less prevalent these days, and in the age of the Internet, it's easy enough for anyone to fact check something like this. That's why I now really enjoy items like the adverts above. It's part of the Houdini story -- part of his posthumous history -- that at one time people widely believed he died onstage doing his most famous escape.