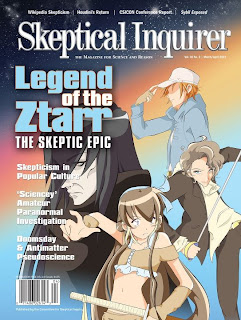 The March/April 2012 issue of Skeptical Inquirer contains a 3-page article about Houdini by Massimo Polidoro (author of Final Seance: The Strange Friendship Between Houdini and Conan Doyle).

The article is called "The Day Houdini (Almost) Came Back From The Dead" and is about the infamous 1928-29 Houdini seances by Arthur Ford. Nothing new or revelatory, but it's a good article that recounts the history of the seances and controversy with some nice photos.

Thanks to Arthur Moses for the alert.
Written by John Cox at 4:34 PM