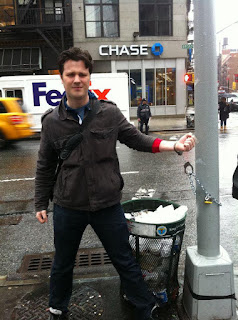 True to his word, artist Sean Von Gorman pulled off his publicity stunt on Wednesday and handcuffed himself to a traffic light outside of Forbidden Planet in New York City until every copy of his graphic novel, The Secret Adventures of Houdini, had sold out.

Sean tweeted the adventure and received quite a bit of publicity. Author Neil Gaiman called it "a proper old-fashioned publicity stunt" and actually tweeted my blog about the event, giving WILD ABOUT HARRY its biggest day ever.

Best of all, Sean accomplished his goal and sold out every issue before he was released from the cuffs after eight hours (much of it in the rain). Forbidden Planet told the artist that The Secret Adventures of Houdini outsold every other mainstream book that day except for Justice League and Avengers.

The stunt was not without some typical New York City excitement. At one point police arrived responding to a 911 call saying that a man was chained to pole being stabbed. Happily that wasn't the case, and the police had no objection to the stunt which had the blessing of the store.

Way to go, Sean! Houdini would be proud.
Written by John Cox at 7:43 AM