No, John Edward did not speak with Houdini 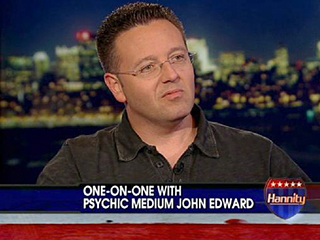 You might start encountering news stories online saying that "Psychic Medium" John Edward has claimed to have contacted the spirit of Houdini who says he will return to earth on April 25, 2012.

"I’m coming back, not reincarnated as a baby but as the man I was the day I died," Houdini told psychic John Edwards [sic] in an amazing, hour-long interview conducted in the bunker below WWN headquarters.

"I am going to prove once and for all that there is a life after death, and I’m going to tell the people of the world just what they can expect on the other side. At last, the veil will be lifted from this mystery of mysteries."

Well, this is just a spoof story, first published at the spoof news site, Weekly World News (home of the Bat Boy!). Not that I wouldn't put it past Edward to claim to have contacted Houdini. He just hasn't done so...yet.

What I'd like to know is whether Weekly World News is running this story in their print version. This would be fun to add to the scrapbook. I'd also like to catch up on the latest Bat Boy sightings!