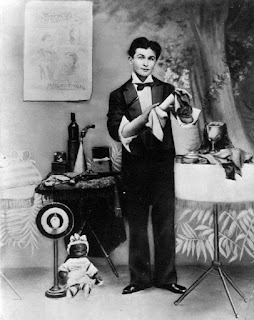 Chicago based magician and Houdini lecturer William Pack has sent over a terrific collection of newspaper clippings he unearthed in the Chicago Tribune. Included are these ads from very early in Houdini's career when he was performing at the Kohl & Middleton's Dime Museums in Chicago.

Dime Museums were one of the lowest rungs on the showbiz ladder, sometimes not much more than a storefront with a mix of sideshow acts, macabre curios, and freaks (the 1953 movie, Houdini, opens with Bess and her schoolmates visiting a Dime Museum). But it was where a hungry performer could always find work, and Houdini would return to Dime Museums so many times that he earned the nickname, "Dime Museum Harry."

The earliest ad William has uncovered is for the week of October 22, 1894, at Kohl & Middleton's Clark Street Dime Museum. On the very bottom of the ad is Harry billed incorrectly as "HOUDIN, Magician." But it's also always possible this is Jacob Hyman, Harry's original performing partner, using the "Houdini" name as he did for years. It's hard to know for sure. 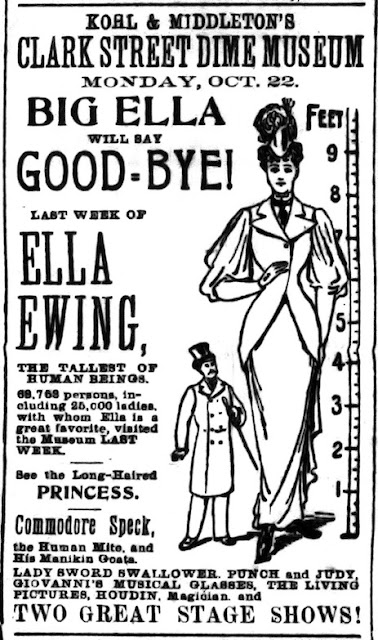 But there is no doubt that this next ad from the week of November 23, 1896, is our man. It shows "The HOUDINS" (wrong again!) as one of several featured acts, using a cutting of Harry and Bess that I've never seen before. It's interesting to note that this ad shows Harry and Bess performing Metamorphosis with just a bag (as does this 1895 poster). Could it be that they sometime did the trick sans trunk, maybe because of the confined space or the need to get on and off the stage quickly? It's something to think about. 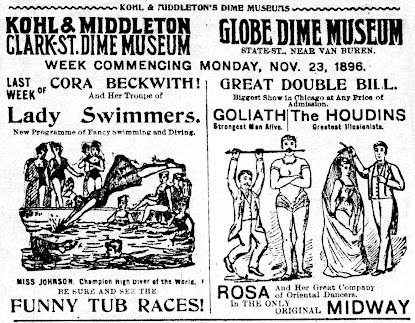 Eventually, Bess refused to work in Dime Museums, at least she refused to work Huber's in New York City, which must have been an especially sketchy venue. In these instances Houdini would perform a solo act.

Here is an ad from February 8, 1899 showing Houdini doing his challenge handcuff act (funny that he is again sharing the bill with Cora Beckwith and her Champion Lady Swimmers, who must have been a little waterlogged by then). Ironically, this is the same act that would make Houdini the highest paid performer in all of Vaudeville just a few years later. "Not bad for Dime Museum Harry," he would quip. 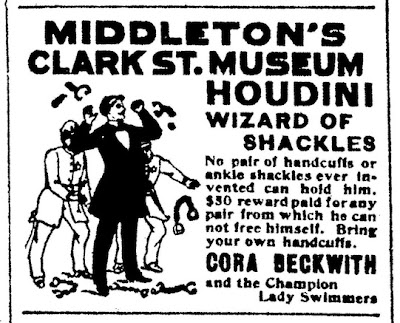 Thank you, William.
UPDATE: I have uncovered another very early ad from the infamous Huber's on 14th Street in New York City for the week of January 21, 1895. You can see Harry and Bess are billed as "HOUDINESE, Wonder Workers."
Written by John Cox at 9:31 AM