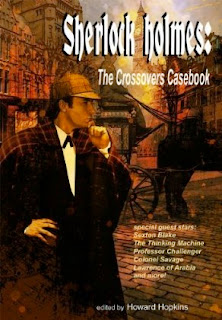 Even though the release date says March 27, Sherlock Holmes: The Crossovers Casebook is shipping now from Amazon.

This new collection of Holmes short stories finds the great detective teaming up with notables of his era such as Arsene Lupin, Lawrence of Arabia, Calamity Jane, Sexton Blake, Colonel Savage (Doc's father), and, yes, Houdini!

The Houdini-Homes story is called "The Adventure of the Magician's Meetings" and is written by Larry Engle and Kevin VanHook. In it, Holmes and Houdini investigate a mystery involving a fake medium.

Purchase Sherlock Holmes: The Crossovers Casebook at Amazon.com.
Written by John Cox at 8:29 AM