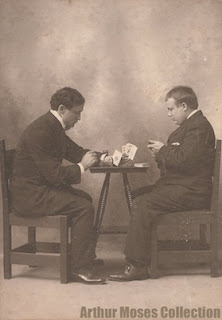 We all know Houdini's brother, Hardeen, was a gambler. Sid Radner said he "played the ponies", and it's been revealed that the reason he sold off many of the Houdini props he inherited was to pay off gambling debts. But what of Houdini? Was he gambler as well? Or did his self imposed prohibition on drinking and smoking as extend to gaming?

While Houdini certainly took an interest in gambling techniques, namely methods for cheating (like the famous Keplinger Holdout), he doesn't appear to have been much of a gambler himself. However, there are two notable occasions where Houdini did take to the gaming tables. Once was in desperation. The other to stem his grief.

The first happened in the Fall of 1897 when the struggling Harry and Bess were swindled out of their pay at a Milwaukee Music Hall. Retreating to the old reliable Kohl and Middleton Dime Museum in Chicago for work, Houdini is said to have "plunged into a game of craps to retrieve his fortunes." Instead he lost $60 (this at a time when he was making at best $25 a week). According to Harold Kellock, Houdini had to promise Bess that he would never gamble again -- "and kept his promise with fair circumspection."

But despite Houdini's promise there is another mention of Houdini taking to the gaming tables, but this time with much better results. After his mother died in July 1913, Houdini was racked with grief. He cancelled engagements in Paris and he and Bess took on a vacation to the French Rivera, hoping to get his mind off his grief. It appears Bess lifted her gambling restriction, and Houdini visited the famous casino in Monte Carlo. On his first night, Houdini came out 500 francs ahead. On his second night he won 1500 francs! (Unfortunately, I could not find a source that records which casino game Houdini was so adept.)


But even his winnings did not brighten his spirits during the dark days of 1913. Instead he made repeated visits to a cemetery reserved for people who had committed suicide. He noted in his diary that the casinos, hoping "to keep things quite", stuffed money into the corpses' pockets to suggest it wasn't gambling losses that led them to take their lives (he doesn't record how he came by this info).

So maybe it's best Houdini wasn't a big gambler. He might not have found many willing partners to play with him. I mean, would you play cards against Harry Houdini?

UPDATE: See the comments section for a Houdini gambling story that I missed.
Written by John Cox at 7:24 AM