In his fictional universe, Houdini has battled evil cults, serial killers, demons, and even leprechauns. But here is one of my favorite fanboy mash-ups. The Handcuff King verses The Count -- Dracula himself! 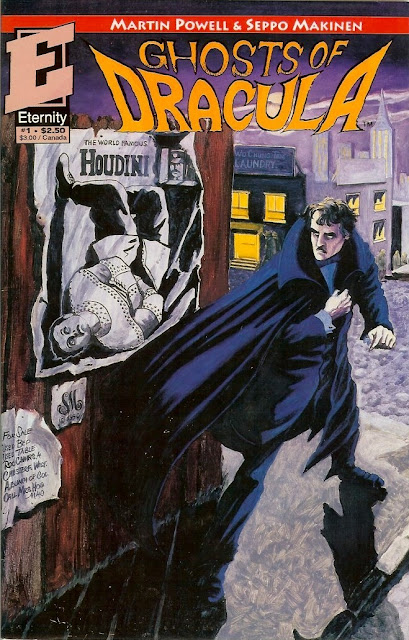 Ghosts of Dracula was a five part graphic novel mini-series released by Eternity Comics in 1991. The Houdini vs. Dracula storyline was written by Martin Powell. In it, Houdini encounters Dracula at a seance in 1925 New York. The Count pines for his long dead Lucy as Houdini pines for his mother, and the two men become friends. But when Houdini discovers Dracula is a true manifestation of evil (as well as being shaken up after seeing the movie Nosferatu with Bess), he sets out for Transylvania where he joins Prof. Van Helsing in his vampire hunt.

It's a cool book with nice pen and ink illustrations by Seppo Makinen. Sherlock Holmes even puts in a brief cameo appearance in the story. This is because the same team of Powell & Makinen had created Scarlet in Gaslight, a Sherlock Holmes vs. Dracula adventure, in 1987.

As far as I know, Ghosts of Dracula is Houdini's only vampiric adventure.
Written by John Cox at 9:46 AM