Genii, The Conjurors Magazine is celebrating its 75th Anniversary this year. Houdini has graced the cover of Genii many times. I've gathered a compete collection of these issues, so in celebration of Genii's 75th, I thought I'd kick off a new series, "Genii & Houdini", in which I will take a look back at each of these issues inside and out.

First up is Vol. 1, No. 2, October 1936. This was only the second issue of Genii, which was originally conceived as magazine devoted to West Coast (or "Pacific Coast") magic news. Editor and publisher William Larsen and his wife Geraldine (parents of Magic Castle co-founders Bill and Milt Larsen) were close friends with Bess Houdini, who lived in Hollywood at the time, so Genii was an extremely pro-Houdini publication from the start. It also just made good business sense (then as now) that if you want to launch a new magic magazine, put Houdini on the cover as soon as possible! And they did. 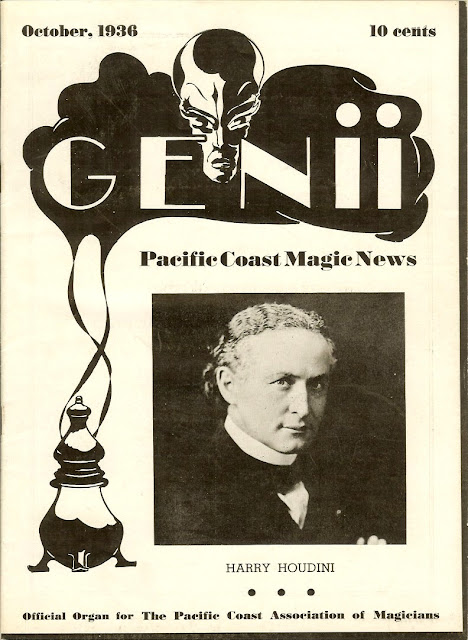 According to MH Magic Magazines, this Houdini issue was limited to only 250 copies as compared to 1,000 issues of Vol 1 No 1. There are lots of Houdini goodies in this rare issue. On opening the magazine you are met with two full page Houdini memorial ads, one from Bess and the other from Houdini's English agent, Col. Harry Day, which reads "England Remembers." William Larsen devotes his "The Genii Speaks" column to Houdini, commenting that if Houdini were alive today, "He would be active in vaudeville, in pictures, radio, and would be preparing himself for television" (!). 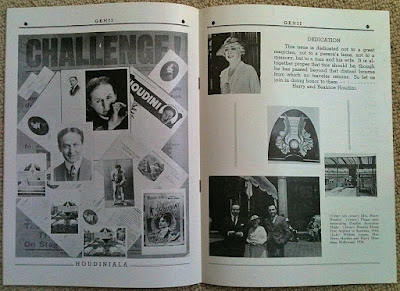 The center of the mag has two-page fold out display of "Houdiniala" including photos of Bessie at Houdini's grave (one of her touching the bust that I've never seen), Houdini's calling cards, stationary, and a photo of Bess with William Larsen and Harry Mendoza in Hollywood.

L.O. Gunn talks about meeting Houdini while he was performing at the L.A. Philharmonic Auditorium in October 1924 (interesting because this engagement is not listed in Koval). Geraldine Conrad (Larsen) devotes her "Paging the Ladies" column to Bess, telling the fictional "acid on dress" story of her first meeting with Harry. There is also a nice quote from Bess that, "Mrs. Larsen must feel the same thrill and pride at the wonderful first issue of her husband's magazine that I did when Harry brought home the first issue of The Conjurors Magazine."

Finally, Ed Saint notes in his "Through the Monocle" column that Bess is going back to New York to spend Thanksgiving with her 88-year-old mother (still alive in 1936!).

Click here for a complete list of all the Genii-Houdini cover issues.
Written by John Cox at 7:39 AM