Houdini is about to become a part of Scholastic's popular The 39 Clues series with a new book, The 39 Clues: The Cahill Files Book 4: The Houdini Escape by Clifford Riley. 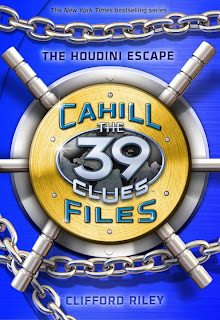 Young Harry Houdini's family is eager for a fresh start in America, but secrets from their past have followed them to New York. When the aspiring magician is kidnapped by a dangerous enemy, the Vespers, Houdini discovers a secret talent: death-defying escapes. Will his rare talent allow him to survive the attack? Or will it get him into deeper trouble than he ever imagined?


The 39 Clues is an interactive and multi-platform adventure series combining books, collectible cards, and an online game where readers become a part of the story. According to Scholastic, "the groundbreaking series is the first of its kind in the publishing industry."

At the moment, The 39 Clues: The Cahill Files Book 4: The Houdini Escape is only available for pre-order on the Kindle (release date August 7, 2012). But a paperback version should be coming down the pike soon. I'll update this post when it does.

Thanks to Charisse Meloto of Scholastic for this first look at the cover art.
Written by John Cox at 11:16 AM