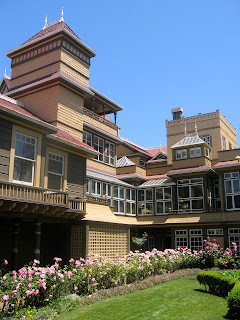 Deadline Hollywood reported last week that Hammer Films (yes, they are still around) is developing a horror movie about the famous Winchester Mystery House in San Jose, California. The house is one of the best examples of Spiritualism run amok as the owner, Sarah Winchester, heiress of the Winchester rifle fortune, was told by her spirit guides that if she kept adding to her house she wouldn't die. The result is a sprawling 160 room maze-like mansion with doorways to nowhere and stairways into ceilings.

But why I'm bringing this up here is there are several Houdini connections to the famous home. First off, Houdini himself visited the house in the 1920s shortly after the death of Sarah (yes, she did die). In fact, the original newspaper article about Houdini's visit is on permanent display in the house museum, as I discovered during my own visit in 2006.

Here's an extra bit of trivia about that visit. In 1988 a man by the name of Fred Paul Faltersack died at the age of 94. In his obituary it was reported that Faltersack was the tour guide who showed Houdini the house that day. It also claims Faltersack later "helped Houdini create some of his illusions."

The Winchester Mystery House was also the site of a Houdini seance in 1977 held by the Society of American Magicians Assembly No. 94. The event -- which was called the "50th Anniversary Seance" even though 1977 marked 51 years -- was covered in The New Tops magazine. The unsuccessful seance was followed by a "nostalgic seance" in which the S.A.M. pros made sure the guests enjoyed some ghostly manifestations. 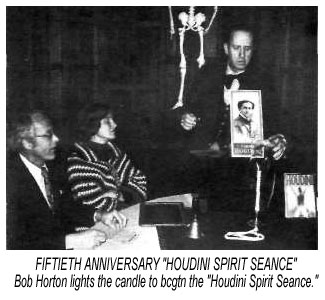 Finally, in 2009 a graphic novel was developed called Winchester that featured Houdini as "the bad guy." The book was written by Dan Vado with artwork by Drew Rausch. Winchester was supposed to be released in October of that same year, but I was never able to track down a copy, so I'm sure if it ever actually made it to stores. But you can get a peak at Winchester's "bad guy" Houdini below (this comes from the blog, The Mind of Drew Rausch). 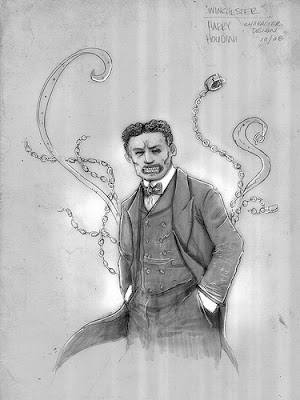 I wonder if this new movie might put Houdini into the story in some way? It's never a bad idea...
Written by John Cox at 1:12 PM