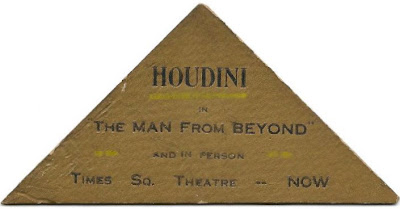 David Haversat Magic has for sale this unique and rare Houdini item. This is a giveaway advertising The Man From Beyond at the Times Square Theater in New York in April 1922.

This wasn't your run-of-the-mill movie engagement. This was the single theater debut of The Man From Beyond, and because Houdini planned to distribute the film around the country via his own Houdini Picture Corporation (using the State Rights method) he worked extra hard to ensure its success at the Times Square Theater. That's why he appeared in person performing Goodbye Winter and Arrival of Summer, the Needles, a straitjacket escape, and a revival of his famous Vanishing Elephant (using a smaller elephant). He also apparently gave away goodies like this.

Now, I'm not sure why this is shaped like a pyramid. I first thought maybe it was playing into the mania that swept America with the discovery of King Tut's tomb in 1922, but that was still five months away. More likely this was just keeping with other The Man From Beyond promotional material that played up the "mystic" aspects of the film, particularly the theme of reincarnation.

David is asking $398 for this unique giveaway. Details here.
Written by John Cox at 1:20 PM