Today we continue our look back at issues of Genii, The Conjurors Magazine that have featured Houdini on the cover. The second Houdini cover was Vol 3, No. 2, October 1938. 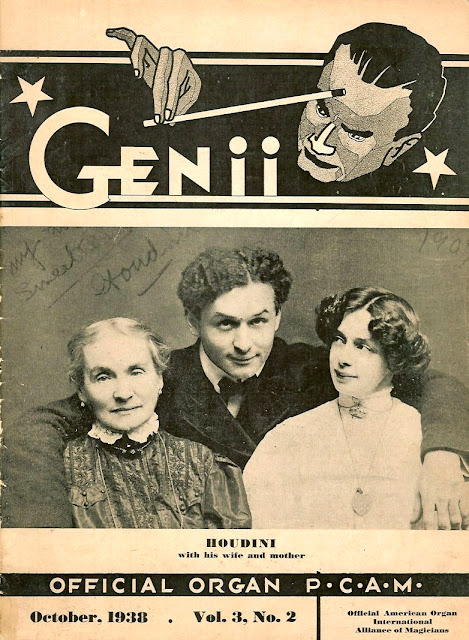 About this cover photo of Houdini and his "two sweethearts", Editor and Publisher William Larsen Sr. (father of Magic Castle co-founders Bill and Milt Larsen) writes:

"This picture, incidentally, is one of my most prized possessions and I am happy to be able to share it in this way with my many friends in magic. Through the good offices of Mrs. Houdini I have, in my files, much interesting Houdiniana. But I chose the cover photo as being one of Harry, himself, would like to see on Genii were he here to advise me. I know it shows him with the two people he loved best in all the world."


The issue inside does not contain as much Houdini material as did Genii's first Houdini cover in October 1936. There's only the annual "In Memorial" page from Bessie (this time with an interesting illustration) and the editorial by Larsen, in which he also states, "Ninety-five per cent of the magicians alive today owe some part of their success to Harry Houdini." (Can't you just see Dai Vernon gnashing his teeth over that one?) 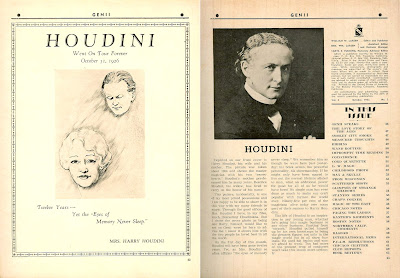 This issue is also notable in that it contains news of the death of T. Nelson Downs, the famous King Of Koins, who was a friend and colleague of Houdini's.

Click here for a complete list of all the Genii-Houdini cover issues.
Written by John Cox at 11:37 AM