The Connecticut estate of Leo Weiss? 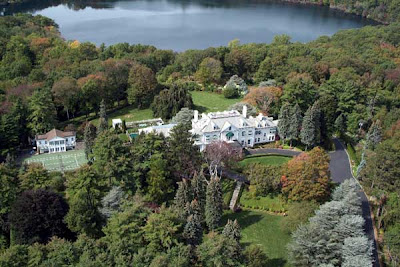 Just when we solve the mystery of one Houdini Mansion, here comes another.

According to Virtual Globetrotting, a massive estate in Ridgefield, Connecticut, known as The Highmeadow Estate, has been taken off the market after being listed for sale in 2008 for $7,490,000. The description on the page, which appears to have been taken from this 2007 auction listing, says the home once belonged to "magician Harry Houdini's brother."

Unfortunately, it doesn't specificity which brother, but I think it could only be Leopold Weiss, who became successful as one of New York's first radiologists. Bill Kalush in The Secret Life of Houdini confirms that "Doc" Weiss had "a huge Connecticut estate."

Of course, Leo was also the brother Houdini ostracized for reasons that are somewhat vague. The general belief is that because Leo married the divorced wife of his older brother, Nathan, Houdini believed the family scandal contributed to his mother's death. However, looking at this house, could Leo's real crime have been that he was every bit as successful as Houdini? 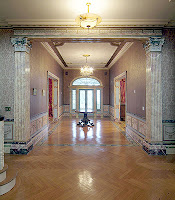 But this house also presents us with an entirely new "Houdini mansion" mystery. The listing states that the house was also owned by actor Robert Vaughn. But Vaughn told our friend and Houdini expert Patrick Culliton -- who worked with the actor on Kung Fu: The Legend Continues -- that he owned Houdini's Connecticut home. Patrick assumed that Leo later took over the estate, which Houdini dubbed the "Weiss farm."

Trouble with this is according to Gresham (Houdini The Man Who Walked Through Walls) Houdini's Connecticut "farm", which he purchased around the same time as 278, was in Stamford. This property is in Ridgefield. Also, this house is said to have been originally built for John Stokes, the U.S. Ambassador to the Court of Saint James, in 1910.

The Highmeadow Estate is located on 5.67 acres and is one of the largest homes and most expensive homes in all of Fairfield County. You can check out more pics of the house here.

UPDATE: Dean Carnegie has confirmed that, yes, this is Leopold's house. In fact, Dean did a nice blog post about it back in December 2010. Thanks, Dean!

UPDATE 2: Turns out the true owner of this house was Leopold's wife Sady. Read: Guest blog: Leopold and Sady Weiss: Why Houdini Wasn’t Happy
Written by John Cox at 12:11 PM