What happened to the Margery box? 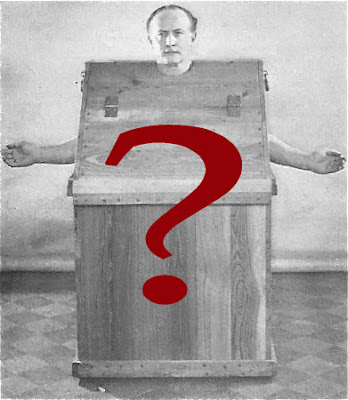 During his highly publicized battle to expose Mina Crandon aka Margery the Medium in 1924, Houdini constructed a special "cabinet box" to contain and control the wily medium during their seances. He called it the "Margie Box."

Of course, there was controversy. At one point a ruler was discovered inside the box that Margery could use to ring a bell box on the table outside. Margery accused Houdini or planting the ruler in the box to discredit her. Houdini denied it. Then Margery forced open the lid and Houdini had to reinforce it with additional padlocks. And so it went.

But the real mystery is what ever happened to the famous Margery cabinet box? According to Ken Silverman, Houdini once again used his "Margie Box" during a demonstration of Margery's techniques at Boston's Symphony Hall in January 1925. Said Houdini, "This is the first time it has been seen outside of the seance room because I was bound to secrecy by the Scientific American." But after this, the box vanishes.

It seems amazing to me that Houdini's Milk Can from 1908 would survive in the basement of 278, yet a prop from 1924 -- one that was a big part of his most famous exposé -- would not. You would have thought Houdini would have kept it for use on other mediums, or even featured it during his full evening roadshow, as explaining the techniques of Margery was part of the third act for a time.

So does anyone out there know what happened to Margery's box? Along with Houdini's biplane, this might be one of the greatest missing Houdini artifact mysteries.


UPDATE: In 2010 Dean Carnegie investigated the whereabouts of the original Margery Bell Box(s) and was able to locate one in the Salon de Magie Collection. According to Dean, there were two Margery cabinets as well, "one tight as a drum and one gaffed." So that makes two missing cabinets.