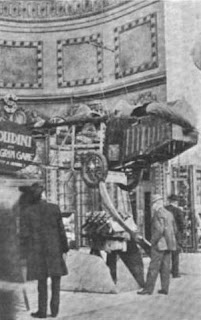 Our friend Joe Notaro -- who runs Harry Houdini Circumstantial Evidence, a blog devoted to The Grim Game -- has knocked it out of the park with his discovery of an article from the November 8, 1919 Motion Picture News which shows airplane wreckage being used a part of a display for The Grim Game at the Princess Theatre in Denver, complete with pictures!

Now, unfortunately, the article doesn't say this is THE wreckage of the actual plane from the film. But this is certainly an inspired promotional idea and, who knows, it does appear to be the same model as The Grim Game plane...

For those who don't know what I'm talking about, one of the highlights of The Grim Game -- Houdini's first Hollywood feature film -- was a real-life plane crash caught on film. The crash was incorporated into the story and used extensively in publicity...right down to theater displays like this one.

Head on over to Joe's wonderful blog to see more photos and read the original Motion Picture News article.
Written by John Cox at 6:40 PM