Houdini is the King (of Diamonds) 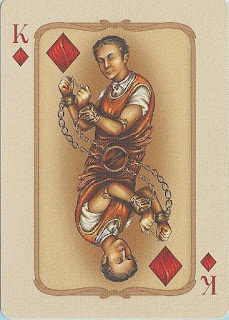 The United States Playing Card Company, makers of Bicycle Playing Cards, has released a limited edition "Vaudeville Deck". The cards celebrate Vaudeville with custom artwork designed "to show that the era may be gone, but it is definitely not forgotten."

What I really like about this deck is the Kings are all magicians of Vaudeville's Golden Age, with Houdini himself as the King of Diamonds! The other magical Kings are Thurston (King of Spades), Carter (King of Clubs), and Alexander (King of Hearts). The Jacks and Queens pay tribute to antique fashion styles.

You can buy the Vaudeville Deck at Amazon.com or direct from The Blue Crown.
Written by John Cox at 1:50 PM