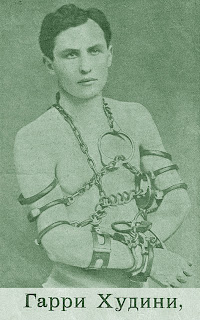 The "100,000-word multi-layered historical novel" is based on Houdini's tour of Russia in 1903. David takes us into the realm of fiction by bringing in President Theodore Roosevelt, who recruits Harry to do a little spy work, and the leader of the Russian secret police, Count von Plehve, who plots to undermine Harry. Other historical characters include Chekhov, Gorky, Diaghilev, Durov the Clown, and, of course, Rasputin! Sounds like great fun.

David's agent, Marly Rusoff, is currently shopping the book to publishers with a goal to get it in stores in 2013.

David has also launched a new blog, The Houdini File, where he will update the latest news on the book as well as his latest (non fiction) research. On that front, David has uncovered remarkable new evidence that Franz Kukol did not leave Houdini's employment at the start of World War I, but remained Houdini loyal assistant (and photographer) until Houdini's death. You can look forward to hearing more about that at The Houdini File.
Written by John Cox at 7:35 AM