Is the Margery Box in Las Vegas? 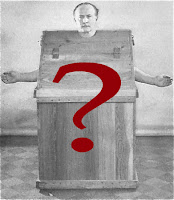 Anna Thurlow, the great-granddaughter of Mina Crandon a.k.a. Margery The Medium, has responded to my story from last week that asked, What happened to the Margery box? Not only is it a great honor to have a genuine Margery relation comment on my blog, but she brings some potentially encouraging news! Says Anna:

"The Margery Box was never in Margery's possession, so I do not have it. When I went to a Houdini Seance in Las Vegas (I think 1998?) I was told that someone living in Vegas had the box in a storage unit there. I tried the telephone number later but it was disconnected. Presumably it still exist and hopefully someone will bring it to light. As an aside - my grandfather (her son) understood Houdini to have put the ruler in the box. I guess we will never know what really happened that day."


Okay, to the person who may have the "Margie Box" (as Houdini called it), here's a plea. How about letting me come out to Vegas and photograph it for WILD ABOUT HARRY? I know it would be a thrill for all Houdini and Margery fans to see this historic item. In return, I'll promote whatever you'd like me to promote on the blog, or you could remain anonymous. If this is doable, please shoot me an email. We could make magic history by bringing this box back into the light!