Last month I posted a look back at Houdini's encounter with Dracula in the graphic novel Ghosts of Dracula. Here's another unusual crossover -- Houdini meets Batman!


The Devil's Workshop was released by DC in 1993 as part of their experimental "Elseworlds" series (setting classic superheros in "strange times and places"). The book was written by Howard Victor Chaykin and John Frances Moore with illustrations by Mark Charello. The extremely dark story finds Houdini and Bruce Wayne/Bat-Man investigating child abductions in Gotham City. Not only does the book experiment with Batman's timeline, but it plays fast and loose with Houdini's timeline as well. Even though it's 1907, Houdini's mother is dead and he makes references to his Buried Alive stunt and friendship with Sir Arthur Conan Doyle. Houdini also smokes in the story. References to Houdini's Judaism abound. He even wields a Jewish star. 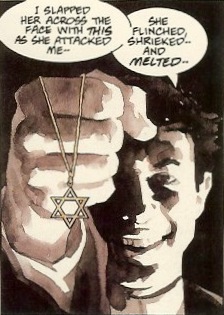 Unlike most graphic novels, we don't get a look at Houdini's stage act, but we do get to see a nifty seance in which the villain/medium conjures "Mama". The artist depicts Cecelia Weiss accurately, but for some reason Charello doesn't draw Houdini from any life image. He looks instead like a young Paul Riser. Tom Mix also makes a cameo appearance.

While I had thought Ghosts of Dracula was Houdini's only vampiric adventure, the villains at the end of The Devil's Workshop turn out to be vampires (I think).

It's really not the best Houdini or Batman adventure, but it is an  interesting experiment and a curiosity worth seeking out.

By the way, according to Patrick Culliton, Batman creator Bob Kane was a big Houdini fan.