Continuing our look back at issues of Genii, The Conjurors Magazine which have featured Houdini on the cover, here we have Vol 5, No. 2, from October 1940. This time the cover features an older poster for The Houdinis. This might have even been the first time this poster had ever been reproduced in print. 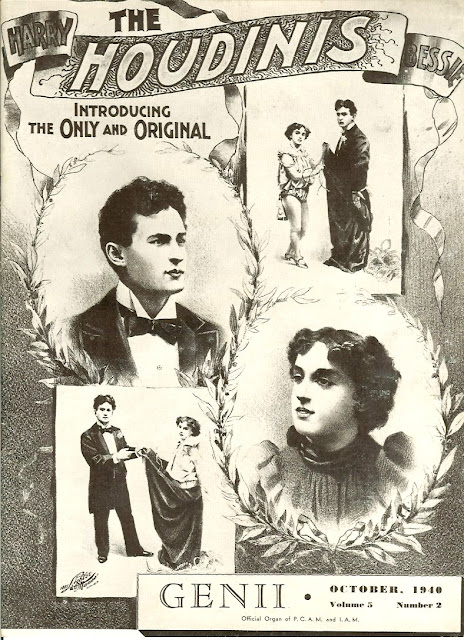 Apart from the usual memorial page and editorial by William Larsen (once again singling out and praising Bessie for her role in "The Houdinis"), this issue contains an article by Houdini written in 1925 called "Psychology of Prestidigitation". In it Houdini refutes claims made by Alfred Binet in an 1894 article for Revue des Deux Mondes. It's somewhat heady stuff (a little hard to follow, frankly) with paragraphs such as:

Binet, referring to the apparent passing of a ball from one hand to another, says, "We would not say , while looking on at the performance, 'I see the ball passing from one hand to the other', we would say, 'I see it; I am positive that it passed' -- An illusion of memory rather than of the senses." The fact that under such circumstances, it is merely a delusion, rather than an illusion.

However, Larsen notes that neither he nor Edward Saint could find evidence that the article had ever been published before. "The rapidly increasing field of lecturer-magician will find, in its contents, much practical material for platform work," says Larsen. 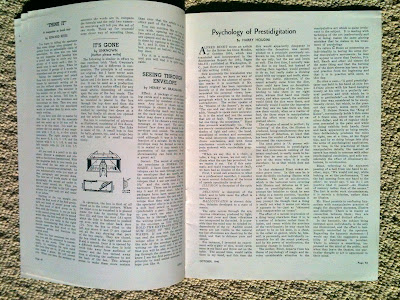 But I think my favorite thing in this issue is a blurb by "C.T." in his column that: "DANTE'S show has really gone Hollywood. It's stupendous, colossal, dynamic, and I might even say swell."