LINK: Who was Houdini's father? The duel 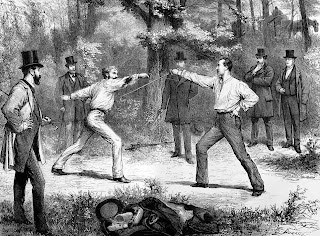 Author and historian David Saltman has published another installment in his series, "Who was Houdini's father?" on his blog The Houdini File. This time David tackles the mystery of "The Duel."

Legend has it that Houdini's father, Mayer Samuel, killed a Prince in a duel, and it was for this reason the Weiss family had to flee to America. Furthermore, it's said that Houdini was actually named after the slain prince, Prince Ehrich. It's wild stuff, and despite corroboration from both Bess and Hardeen, most recent biographers have dismissed this as Houdini folklore.

But now David is uncovering information that shows the story is not as outrageous as it sounds, and that the Weiss family may have indeed had encounters with royalty while living in Budapest. It's a must read along with David's other posts on the Weiss family before America.

Click on the headline or here to read all about The Duel.
Written by John Cox at 12:54 PM