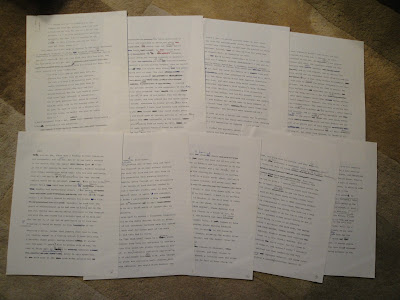 A collection of nine typewritten and edited pages "for a book about Houdini Movies" sold on eBay today for $22. The auction received five bids. The seller states that "I am not sure what this is from, I received these with some other papers, so I have no more info."

The pages appear to have been written around 1994-95, and mystery author writes that "his dear friend" Manny Weltman said to him "We are probably the last people doing any serious research on Houdini."

The writer also states that he has in his "private collection" photos of Houdini with a "life like dummy" that he used during the filming of The Man From Beyond and Haldane of the Secret Service. The dummy was used during the frozen in ice, paddle wheel, and Niagara Falls sequences (along with another dummy of Jane Connelly). The use of a stunt dummy was, of course, never revealed publicly.

So we have three mysteries here. Who wrote these pages? Who has these Houdini-dummy photos? And does the Houdini stunt dummy still exist today?

UPDATE: What happened to the dummy is revealed HERE.
Written by John Cox at 6:43 PM