Continuing our look back at issues of Genii, The Conjurors Magazine that have featured Houdini on the cover, here we have Vol 4, No. 2, October 1939, which this time gives the cover over to that other Houdini -- Bess. 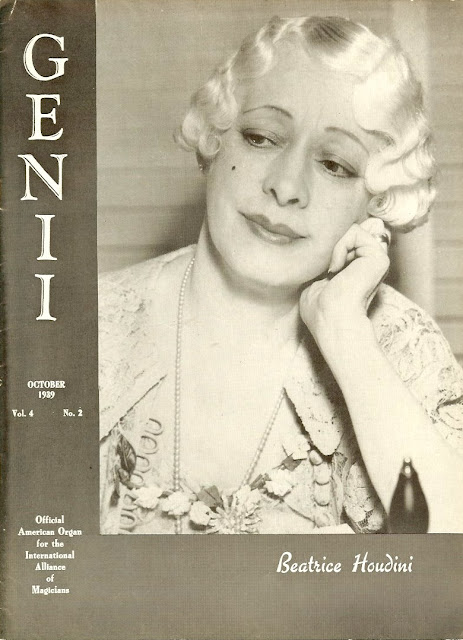 Genii was originally conceived as a magic magazine devoted to West Coast magic news, and Bess Houdini was a huge part of the West Coast magic scene and a source of great pride for the magic community. (Interestingly, there is a hint of jealously in a mention that "a handful of people in New York" are spreading rumors that Bess doesn't have to pay for her Genii ads). Bess was very close with editor and publisher William Larsen Sr. and his wife, Gerri. In fact, much of the memorabilia that now fills the Houdini Seance Room at The Magic Castle comes from this time and association. The mutual affection is in full bloom here as William Larsen writes:

In all the world there is no more staunch supporter of magic than is Mrs. Harry Houdini, widow of then late great magician and escape artist. [...] Mrs. Houdini has lived in New York, Florida and California. She is now a frequent visitor to the first mentioned states. But we claim her, here, as our own. Her home, beautifully situated on one of the finest, widest streets in Los Angeles, is a mecca for local magicians; for out of town conjurers when they visit Southern California. It is there that Beatrice Houdini presides as the fist lady of Magicdom. Is is there that conjuring men can go and talk, and live over again the grand, mighty days of the glorious past. [...] Houdini made his name mighty and powerful. Mrs. Houdini has made it lovable and charming. [...] Hail the Queen of Mystery -- Mrs. Harry Houdini!


Later in the issue it's reported by Geri Larsen that the Magigals (an organization for female magicians and wives of magicians) held "one of our very best" meetings in Bess' Hollywood home. "The best trick of all being the production of a marvelous repast from behind a gorgeous teakwood screen." The issue closes with two tribute pages to Houdini -- one from Bess and the other from Hardeen. The issue also reports on the death of Horace Goldin. 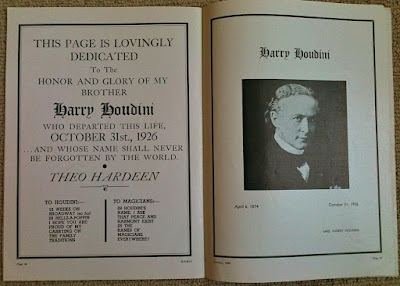 You know, reading these old issues, I'm starting think this series might turn out to be more interesting than I first thought. It clear that Genii and Houdini had a real love affair in the early years, but I'm not sure that remained the case. Will looking at these issues one by one reveal when the relationship went sour and why?