Paste Magazine.com, a website devoted to "Signs of Life in Music, Film, & Culture", has taken a look at 100 years of movie posters and have selected a Best Poster for each year. Impressively, The Grim Game was named the best poster of 1919. The website writes:

1919: The Grim Game - Here’s Houdini doing what he does best: escaping. It sells the plot of the movie and sells the image of the escape artist as well. 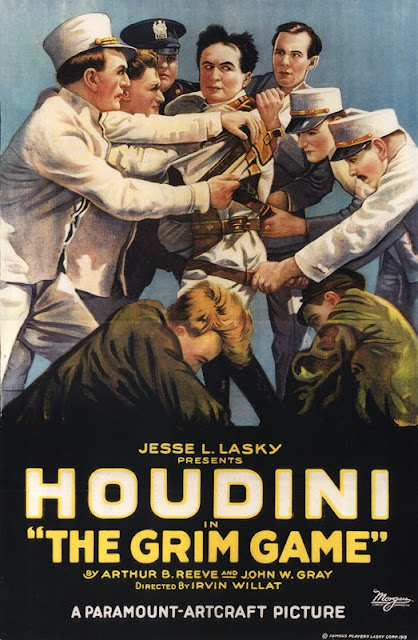 While The Grim Game had several different posters showing Houdini in escape action, the website features the above poster as representative of their "Best." Hey, you'll get no argument from me. It's a beautiful sheet.

It's not generally known that the image on this poster is actually taken from an equally dramatic still photo. I got a look at this still when I examined The Grim Game file at the Academy of Motion Pictures Arts and Sciences Margaret Herrick Library last year. As far as I know, the photo has never been reproduced in any book. (I can only offer a tease here as I don't have reproduction rights.)

Thanks to Joe Notaro over at Harry Houdini Circumstantial Evidence who alerted me to this one. Joe's website is devoted exclusively to all things Grim Game related, and Joe has been turning up some wonderful discoveries from what is considered to be Houdini's best movie.
Written by John Cox at 8:18 AM