Last week I had the extreme pleasure of attending Magicana's 43rd Magic Collectors Weekend in Chicago, which this year offered an embarrassment of riches for the Houdini buff.

I knew this was going to be my kind of event when I saw that the official program featured Houdini on the cover. Actually, there were two programs printed with two variant Houdini covers. As you only got one in your convention pack, a weekend challenge was tracking down that second variant! Inside the program is the recently discovered Water Torture Cell photo from Scotland. This program marks the first in-print publication of this incredible photo.

I flew in late on Thursday afternoon, so I unfortunately missed the dealer show hosted by Tom Ewing. This is too bad, because from the photos I've seen, the show appeared to be filled with fun and magic. But I was there for the lively interview with the weekend's Guests of Honor, Richard Kaufman (editor of Genii and publisher of many books) and James Hagy.

A nice cocktail reception followed where I was able to meet and greet my fellow collectors. Some, like the legendary Mario Carrandi Jr., I was meeting in person for the first time after having corresponded with them for years. Speaking of Mario, at his dealer table he had Houdini's walking stick. The stick is inscribed to Houdini as a gift from Will Goldston. Price: a cool $25,000. Well, at least I got to touch it!

Friday morning kicked off with James Hamilton giving a talk on the Herrmann dynasty. James is THE man when it comes to all things Herrmann. He even sports Herrmannesque facial hair. James spoke about Houdini's connection to the Herrmann family (via Blanche Corelli), and said that he thought it odd that Houdini never played up his relation to this famous magic family in his own publicity. (I agree. It is odd.) After the talk, James gave me his booklet about Herrmann and Jesse L. Lasky. Lasky produced Houdini's two Hollywood features, so it's interesting to learn about a Lasky-Herrmann connection. Following James was Will Houstoun, editor of The Magic Circular, who gave a very well researched and informative talk on the influence of magic playlets, including Prof. Hoffmann's King Koko.

After a short break, it was my turn! Now I can finally reveal the nature of my talk. A few months ago I was contacted by MCW organizer David Ben and the tireless Julie Eng who asked if I would like to give the attendees a look at a remarkable Houdini artifact they had unique access to. This was the actual guestbook which sat inside Houdini's home at 278 W. 113th St, and later Bessie's residence at 67 Payson Avenue, from 1919 to 1975. Inside are an amazing collection of some of magic’s most famous names; Thurston, Dunninger, Powell, Horace Goldin and many, many more. There are also some intriguing historical gems, like Houdini's sister Gladys signing her name as "Gladys Houdini" and the revelation of a hitherto unknown séance! (I'm going to blog more about this mysterious séance at some point).

Armed with a copy of this amazing guestbook, I worked up a presentation called "Guests & Ghosts of 278." To introduce the book, I first showed photos of Houdini's New York home, including photos of the inside of 278 today (the story of how I got these and why I can't post them here on my blog got a nice laugh). I then paged through the book via a big screen Keynote presentation, showing some of the famous names and offering some background and speculations, etc.

I've gotta say, I've never done anything like this before. Two months ago I had no idea how to use Keynote. I didn't know if it would work, if I would freeze and forget everything, or even how much time I was allotted or I would take. But I think it went wonderfully well, and I was moved that so many of my fellow attendees went out of their way to tell me how much they enjoyed it afterwards. Whew! I really appreciate David and Julie giving me the chance to do this talk. This is something I'd love to do again, as I tweeted immediately after the presentation:

After lunch we returned for a terrific lecture by David Charvet on "Emil Jarrow: The Humorist Trickster". One of the reasons I love attending events like the MCW is that I get to learn about magicians other than Houdini. I admit I had never heard of Jarrow until this weekend. Again, terrific stuff!

David Ben than gave a fascinating talk on Max Malini, "Uncited Sources - The Rise & Fall of Max Malini". Now, I had heard of Malini, but I really didn't know much about his life and work, which turned out to be very interesting indeed. This was followed by a special screening of a filmed panel discussion about Charlie Miller "by those who knew him best". Unfortunately, this was the only event that I missed as I was crashing after all the pent up energy I had for my own talk, and I had to sneak back to my room for a quick nap before dinner. Besides, I wanted to be fresh for the BIG night. 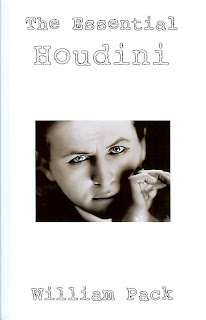 That BIG Friday night kicked off after a dinner break with the great William Pack giving a taste of his acclaimed Houdini lecture, complete with props. Bill puts on these talks in libraries and schools across the country. His presentation is very entertaining and dramatic, and I was grateful for all the advice Bill gave me on doing Houdini lectures (as I now have the bug). Bill has also published a 130-page book that he sells at his talks, The Essential Houdini, which of course I had to snap up!

Following Bill's talk was a screening of a remarkable archival copy of Houdini! - Witness to Yesterday. Witness to Yesterday was a half-hour Canadian series featuring Patrick Watson interviewing famous people from history. In this episode he interviews "Houdini" portrayed by Teller of Penn & Teller. It was really very well written (by Thomas Baxter) and performed, and I've yet to talk to one person -- including "Handsome Jack" Lovick who is THE Penn & Teller expert -- who even knows about the existence of this program. I respected the convention rules and did not snap any photos of the screen -- but I'll tell you that Teller looked pretty good in his Houdini wig. I really hope this sees the light of day at some point as it was a real treat.

Then came the highlight of the evening (and maybe the weekend itself). Arthur Moses took the stage and offered up his "game changer." In a talk called "Have You Heard It All?", Arthur played the complete Houdini voice tapes. I've already blogged about this here, but I'll just say again that hearing the full voice recordings was incredible! In essence, what we heard was over five minutes of Houdini's voice that is not available to the public and has only ever been heard by a handful of people.

Afterwards I got a more intimate listen as I helped Arthur and his crew double check the transcriptions. I was struck by how Houdini's voice was even more heavily accented and his English even more broken than what we hear in the familiar 1:20 version (which is an edited combination of both recordings, as Arthur was able to demonstrate). The major difference between the two versions seemed to be that in one Houdini issues his $1000 challenge "to anyone who can prove it is possible to obtain air inside of the Torture Cell" and in the other he didn't; although there were changes in phrasing throughout. In the non-challenge version (I think) he signs off by saying, "This record spoken by Harry Houdini."

Unfortunately, I don't think Arthur will be able to release these recordings in any major public way. The same goes for the 278 guestbook and the Teller film. But that's why there are events like the MCW. Some things can only be shared in this way.

Saturday kicked off early with an open forum discussion moderated by David Ben. Here the future of the MCW was discussed, including the possibility of it becoming a bi-annual event and moving to different cities. After this, Loren Pankratz gave a very interesting talk on Reginald Scot's Discoverie of Witchcraft, which is the first English language book to describe the methods of magic.

Next up was magician (or "Magicienne") Julie Sobanski with her well-crafted talk on "Women in Magic". Julie is currently writing a book on her topic, and I really enjoyed her presentation, especially as I had just been to the Magic Castle's own celebration of Women in Magic Week. Why aren't there more female magicians? Julie got the biggest laugh of the convention when she proposed one theory: "Early maturity steers most girls away from magic."

Julie, by the way, is president of the Houdini Club of Wisconsin and an escape artist in her own right. She even performs a straitjacket escape in rollar skates!

After Julie came my friend and fellow Angelino, Diego Domingo, who gave a wholly unique talk called, "The Prophet, the Assassination, the Cult of Doom, and Top Hat Magic" (featuring Arthur Moses doing his best "hick" voice). It was a terrific talk that had the room laughing and gasping at the artifacts Diego has collected during his on-going quest to expose religious hucksters -- some of whom use store bought magic tricks to prove their divinity. Fantastic stuff!

After a short break, the mighty Max Maven presented his talk on "Magical Jews - By One of Them." This was the same talk Max gave at the Skirball Cultural Center last year during the Houdini Art and Magic and Masters of Magic: Jewish Magicians of the Golden Age exhibitions. As I missed that, I was thrilled to catch it here. Needless to say, it was excellent, even though Max warned us up front that he wouldn't be talking much about Houdini as "he has his own press."

After a lunch break came Trevor Dawson from the UK who gave a very well researched and informative lecture on "Charles Dickens: Conjurer, Mesmerist, and Showman". This was followed by Bill Spooner's "Remembering Rex Slocombe" which included his own personal recollections at just how talented and funny Slocombe was. And speaking of voice tapes, Bill played the only known recording of Slocombe doing his famous comedy magic act.

Next came a special drawing for five copies of "The Shroud of Vernon." These are numbered pieces of cloth "Cut from the Shroud of Vernon" containing the phantom image of Dai Vernon's favorite card, the Ace of Clubs. I never win things like this, so it was a great surprise when I won! I think Houdini was looking after me this weekend.


Then came a screening of a documentary about Mark Wilson's groundbreaking The Magic Land of Alakazam, followed by a Q&A with Mark and Darnell Wilson themselves. It was a real thrill to see and hear one of the great magicians of my childhood, and a true pioneer of magic on television.

After a dinner break, it was back to "The McVicker's Theater, circa 1912" for "An Evening of Mystery: Magical Varieties". Here David Charvet MC'd the evening as Jarrow, and also performed an amazing spirit painting effect; David Ben did a terrific magic performance with cards; Mark Wilson surprised the attendees with a performance; and Max Maven closed the show doing card and mind reading that absolutely blew my mind!

A final dessert reception was held after the big show. And with that the 43rd Magic Collectors Weekend came to a close. What a magical time it was! 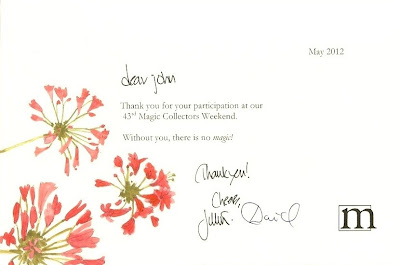