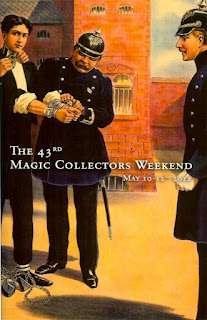 I'm back in the saddle after a sensational time at the 43rd Magic Collectors Weekend in Chicago. Those who were following my tweets know that the event was jam-packed with Houdini goodness, including my own lecture and the playing of the full Houdini voice tapes.

But there were also fascinating lectures on other great figures in magic such as Jarrow, Herrmann, Max Malini and much more.

I'm working away on my full report and hope to have it up this week. In the meantime, enjoy the program cover (right), which was one of two different Houdini-themed covers. I'll show you the other in my report.