Our friend Joe Notaro over at HHCE has come up with a nice new nugget of info about Houdini's movie career. Joe examined four mysterious Houdini "movies" that appear in newspapers around 1920-21: The Marked Woman, The Lure of Power, The Law Pirates and The Doctor’s Vengeance. It's clear from the ads that these features were made using footage from Houdini's 15 episode serial, The Master Mystery. But were they legitimate releases? 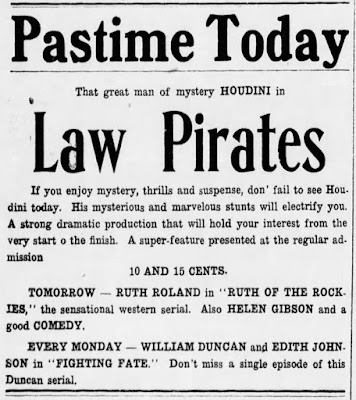 We now know that answer is "no." Joe has discovered a notice from Octagon Films warning distributors that the titles are pirated work by Amber Productions of Philadelphia. It certainly took some cheek for Amber to call one of their movies "Law Pirates." 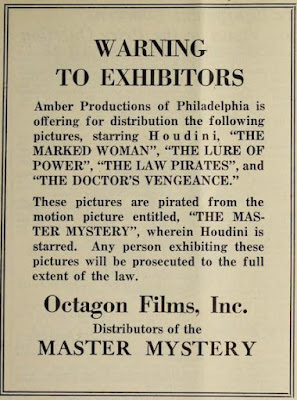 By 1920, Houdini was on the outs with Octagon and producer B.A. Rolfe. He had to sue for money owned him for the serial. So here's a thought. Could Houdini be behind Amber Productions? He might have felt entitled after being stiffed by Rolfe, and he did own a film lab that could have whipped up these prints. Just throwing it out there.