Discovering the Dark Art of Houdini (and Jaime Robledo) in Hollywood 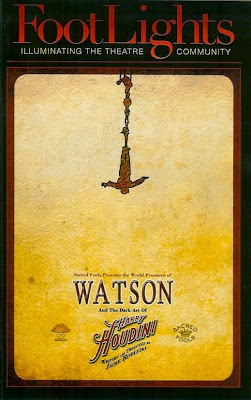 On Sunday I had the great pleasure of seeing Watson and The Dark Art of Harry Houdini at the Sacred Fools Theater in Hollywood. Of course, I went to see Houdini and all else is secondary in my sick mind. But when I left, all I could think about was just how excellent the entire production was. I don't think I've ever seen local theater so cleverly staged as this play by the talented writer-director Jaime Robledo. But let's take this one step at a time.

I was happy to have wrangled a few magical associates to accompany me to the Sunday matinee. My crew consisted of Joseph Fox (handcuff expert), Joe Notaro (webmaster of HHCE), and Mark Willoughby (producer of The Ghastly Love of Johnny X). The experienced started with the temperature that day soaring near 100 degrees. But that somehow made it a true L.A. theater going experience, which can sometimes require heroic effort.

The Sacred Fools is a wonderful, intimate theater space located off Melrose Ave in what is known as East Hollywood. You're not stepping into the Pantages, that's for sure, but that's part of the appeal. There is a tangible passion and love of theater in every bit of this cleverly laid out small space. You are warmly welcomed and made to feel like you are part of the theater family. I was also happy to see the lobby decked out in Houdini posters. Even the bathroom was peppered with Houdiniana [click for pics]. So, yeah, they pretty much had me from the start.


Watson and The Dark Art of Harry Houdini is first and foremost a Sherlock Holmes play. Well, to be more precise, it's a Sherlock Holmes play in which Dr. Watson (superbly played by Scott Leggett) is the main character. This is actually a sequel to Jaime Robledo's 2010 production, Watson: The Last Great Tale of the Legendary Sherlock Holmes. It helps to have some knowledge of that first show (I didn't), but this sequel is well written enough to catch you up quickly and root you in this unique Holmesian timeline (10 years after Holmes and Watson's last adventure).

The first of many pleasant surprises was that the show was funny. Very funny. I might even classify it as a comedy, although it journeys into serious drama as well. Joe Fria plays Holmes very broadly and largely for laughs. I'm a bit of a Holmes purist, so I didn't love that, but it works here to shift the focus onto Watson, who has to tolerate his wildly moody and, yes, even buffoonish companion. However, Holmes' introduction and first deduction of a murder scene is extremely well done and shows us Sherlock at his full power. It's the first of several show stoppers.

The play also features Graham Skipper in a duel role as a somewhat sex-crazed Sigmund Freud and a Sherlock Holmes wannabe named Pike. Skipper is very funny and comes close to stealing the show whenever he's onstage. Other cast members include the very attractive Carrie Keranen as Violent Hunter, Eric Curtis Johnson as Mycroft Holmes, and Cj Merriman as the spirit of Watson's first wife, Mary Morstan.

But what of Houdini? Well, Harry Houdini is played here by Donal Thoms-Cappello and he knocks it out of the park! It helps that the actor is clearly a major star in waiting. He has the presence and charisma of a leading man, which makes his Houdini jump off the stage just as he did in life. When you have Sherlock Holmes, Dr. Watson and Harry Houdini all sharing the same space, it could be hard to decide who is the most famous and iconic of the men. In this play it's clearly Houdini, and that is in no small part due to Donal's presence and performance. My companions all commented on how he reminded them of Johnathon Schaech in Houdini (1998). I could also see that. But I think Donal is better.

One thing that instantly jumped out at me was that Donal gives Houdini a somewhat heavy New York/Brooklyn accent. While Houdini didn't have this accent (Hardeen did), I think this works quite well. Talking to the actor after the play, he explained that he wanted to infuse his Houdini with a sense that underneath the wealth and fame is still a very tough, street smart character. The accent does this beautifully, and also works as a nice "new world" contrast to all the English accents in the play. By the way, Donal did Houdini's real voice for me after the show -- reciting; "the Water Torture Cell" -- which was great fun. (I also noticed he was holding a copy of Carter Beats The Devil.)

The actor also earns his magic stripes by performing a suspended straitjacket escape wrapped in chains during the show. This escape opens the second act and it's quite a harrowing thing to experience in such a small theater space. I hadn't expected to see any Houdini feats recreated, so this was a pleasant surprise.

Another pleasant surprise was that Bess is also in this play, although only briefly during two seance scenes. Here she's played by Lisa Anne Nicolai, who happens to be a good physical match for Bess. (When she first came out on stage as part of the stage crew, Joe Fox immediately identified her as a perfect Bess and was happy when she later appeared in the part.) I was able to chat with Lisa after the play and she explained that in doing research she was surprised to see that Bess wore her hair short, like her own, which she noted was quite progressive for the time. (I've often thought the same thing.) She seemed to have great affection for Bess and enjoyed playing the part, even though the majority of her stage time was spent as part of a troop of black clad pantomime artists who assist in the complex and creative staging of the play.

Lets now talk about that staging. For me and my companions this was the highlight of the show. The Sacred Fools has a small stage with just one set. But somehow on that stage we get to see an ocean liner sailing away from a dock, a shuffle board game between Houdini and Holmes (probably my favorite piece of staging), the bustling Coney Island midway, a carousel spinning wildly out of control, and a roller coaster! All are convincingly portrayed with a mix of pantomime and clever stagecraft. Really great stuff.


The plot of the play finds an estranged Holmes and Watson reunited by Mycroft to investigate a series of grisly murders. Houdini, who is name-checked as Ehrich Weiss early on, is a chief suspect. There are also nods to Houdini's Scotland Yard handcuff escape (ahem) and the Mirror Challenge (Watson was in the audience). The action moves from London to Coney Island's Dreamland Park. Part of the play explores Watson's struggle to deal with the death of his wife, Mary. The play actually has a shocking surprise ending, but I won't spoil it.

As I said, I was able to chat with the actors as well as Jaime Robledo after the show. I was happy to learn that the director is planning a group trip to the Magic Castle very soon. They were all eager that magic fans come and see the show (which runs through July 27), so let's help spread the word. The program shows that Donal Thoms-Cappello's understudy is Curt Bonnem (a magician), so I would be curious to see his take on Houdini should the opportunity arise.

The original plan for our little magic crew was to visit the grave site of Harry Kellar after the show. However, we stayed late and the cemetery was closed, so we instead wandered across the street to an antique store. There two magical surprises awaited us. The first was a gigantic original Carter poster. The other was a spotlight from the New York Hippodrome circa 1910-1920. Yes, that light could have illuminated Houdini and his vanishing elephant [click for pics].

How strange for all these ghosts of magic to have come together on this one block in East Hollywood on a hot Sunday afternoon. But that's the Dark Art of...you know who. 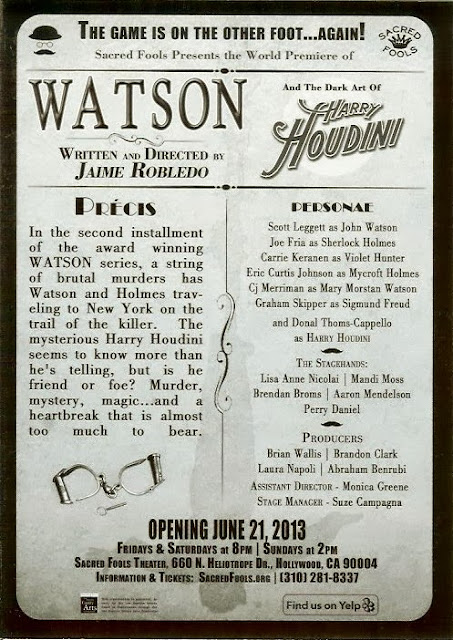 Watson and The Dark Art of Harry Houdini plays through July 27 at The Sacred Fools Theater, 660 N. Heliotrope (at Melrose Ave), Los Angeles, CA 90004. Click here for more information and to buy tickets.

@HoudiniWild Wild about Houdini was wild about #watson2. So great to put on a great show for these guys.
— Jaime Robledo (@Roblizzle) July 1, 2013