Stream The Man From Beyond 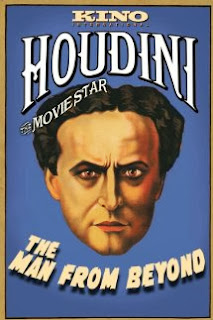 The version offered here is from the 2008 Kino box set, Houdini The Movie Star, which collects all of Houdini's available silent films along with rare footage of his real escapes. The steaming page features this unique Kino The Man From Beyond artwork.

It's very satisfying to see Houdini's movies being offered via the most modern methods of film distribution. Of course, we don't yet have in any form the one Houdini movie we most want to see...

Click here to stream The Man From Beyond via Amazon Instant Video (Amazon Prime members can stream for free).
Written by John Cox at 9:14 AM

Email ThisBlogThis!Share to TwitterShare to FacebookShare to Pinterest
Tags: Movies, The Man From Beyond (1922), Video, Video (streaming)