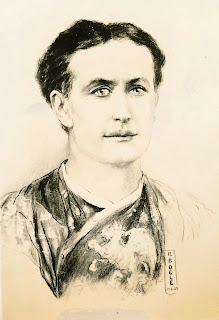 This interesting illustration of Houdini is currently cycling for a second time on eBay. This portrait shows Houdini in what appears to be a Kimono and was done by R.B. Ogle, an illustrator of children's and adventure books in the 1920s.

This isn't Ogle's only Houdini work. He also did a beautiful illustration of the plane crash action from Houdini's The Grim Game. That original is now in the Arthur Moses collection. As they are both dated 1920, it's likely these were done at the same time. But why the unusual get-up here?

Chuck Romano over at My Magic Uncle discovered this one and first brought it to my attention. Until his post, I'd never seen this image before. But then in one of those odd Houdini coincidences (that happen to me all the time), when I was paging through Houdini's lost Spiritualism scrapbook, there was Ogle's Kimono'ed Houdini staring back at me from a 1925 newspaper article about Houdini teaching police "how to fight ghosts."