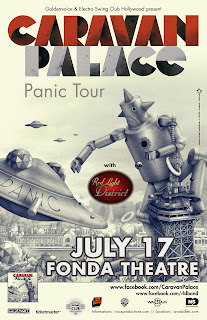 Looks like Houdini is alive and well in Hollywood this month. Not only do we have Watson and the Dark Art of Harry Houdini selling out at the Sacred Fools, but now comes word that the band Red Light District will be doing a special Houdini-themed performance during their upcoming show at Caravan Palace at the Fonda in Hollywood on July 17 (which also happens to be a significant day in Houdini history).

Singer and songwriter Juliette Angeli informs me that the band will perform their song "Handcuff King" with magician and Magic Castle regular Micah Cover on stage doing a straitjacket escape timed with the music. Sounds fun.

Red Light District is a Los Angeles based band "with one foot in the future and one in a dark, smokey jazz-age cabaret." Songs are written by Juliette Angeli & Shok and performed live as a big band. You can learn more about them via their Facebook page.

For more information and to buy tickets to the Caravan show visit the goldenvoice website. You can listen to Red Light District's "Handcuff King" below.