Today I'm thrilled to share news of a truly incredible find. A hitherto unknown Houdini scrapbook -- which has possibly gone unseen for 83 years -- was recently discovered by an antique dealer in Southern California.

This amazing book, which Houdini compiled and labeled as "IMPORTANT SCRAP BOOK - MISCELLANEOUS CLIPPINGS," is jam-packed with newspaper clippings about Spiritualism and Houdini's own spirit busting activities. Many of the clippings have annotations in Houdini's own hand. The majority of the material is from 1925 with a few clippings from early 1926.

Of course, 1925 was the height of Houdini's anti-spiritualism crusade, and it was also the year of his exposure of Margery the Medium. Therefore this scrapbook is filled with clippings chronicling Houdini's most famous investigation. It also contains several clippings related to Sir Arthur Conan Doyle.

While the scrapbook is devoted specifically to spiritualism, there are also several semi-related curiosities; such as a clipping about Friedrich von der Trenck (see: Is this Houdini in a past life?), a random Thurston advert, a story about whether pets live on after death, and a page devoted to Houdini's performance before the Roosevelt grandchildren, which is the only full account of this I've ever read (watch for a post about this soon). There are also two letters addressed to Houdini, one of which the magician has annotated, and a lengthy article about Houdini in French from a Montreal newspaper. Eerie to think that J. Gordon Whitehead almost certainly read this article.

So what's the story behind this amazing find? 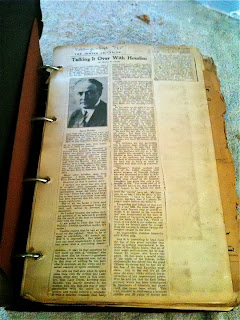 A few weeks ago I received an email from Mike, a long-time California antique dealer, saying he believed he had found a Houdini scrapbook. Frankly, it sounded too good to be true. But the photos he sent were intriguing and he said an expert dealer had concurred that it was a Houdini scrapbook. He then graciously invited me to come have a look for myself.

So, on the following Sunday, I set off to see what I thought couldn't be. Well, I knew on first sight that the unbelievable was true. This is, unquestionably, one of Harry Houdini's original scrapbooks. In fact, I think this might be one of Houdini's most important scrapbooks (hence the title) as it's really a tool for the magician to use in his battles against spiritualists. Many of the damning incidents that Houdini would cite against mediums (suicides related to seances, etc.) as well as stories of their underhanded methods are collected here. And then, of course, there's all the Margery material.

In fact, the importance of this scrapbook might be why it went missing from the collection of over 100 Houdini scrapbooks currently in the Library of Congress, and why it wound up on the West Coast. Mike has no provenance for the book, but it could be that Edward Saint brought this book with him to California when he and Bessie relocated here in the 1930s. Spiritualism was still a hot issue for the couple, and having Houdini's research scrapbook was probably a valuable tool. After Saint's death, the scrapbook could have been sold or given to a magician or Houdini enthusiast by Bess, and then went into storage where it's been for an unknown number of years.

Amazingly, this is the first Houdini item Mike has ever discovered in his 30 years of collecting. "It was a good day," he says.

The exciting news for collectors is that Mike is planning on selling this. He says he would like this important Houdini artifact to go to someone who "will appreciate it and look after it" and also "share it in some way with other Houdini enthusiasts." He has not yet decided whether to sell it through a national auction or privately, but he is open to hearing from interested collectors.

Now, I'm not brokering this and I don't know what price Mike has in mind (I made him the best offer I could), I'm just volunteering to put him in touch with fellow Houdini collectors as thanks for letting me see this amazing scrapbook and share the news of its discovery here on WILD ABOUT HARRY.

You can reach Mike by sending me an email via my CONTACT PAGE. I will forward all emails onto him and keep all correspondence confidential.

Now put on your drool cups and enjoy these photos of Houdini's long lost Spiritualism scrapbook! 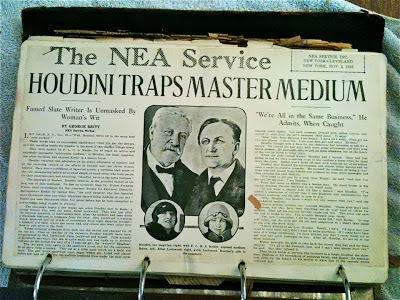 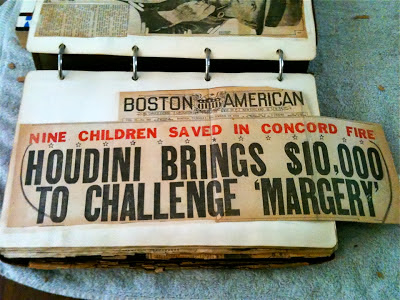 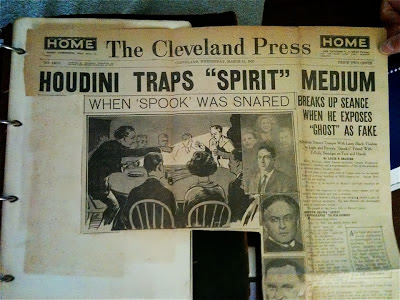 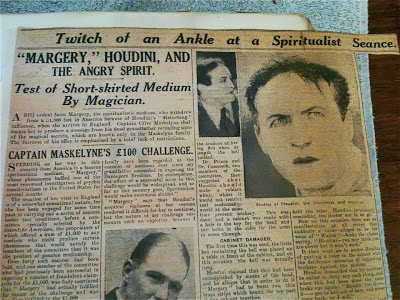 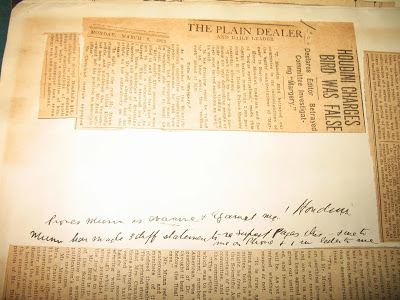 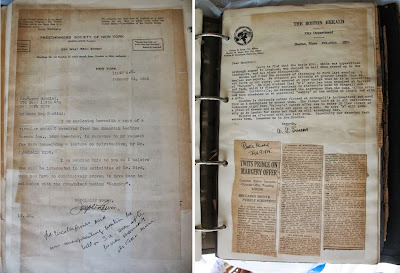 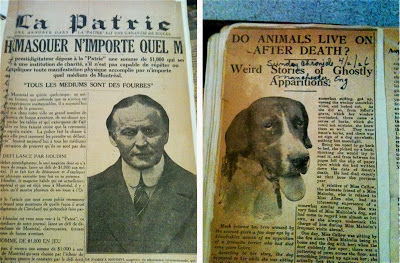 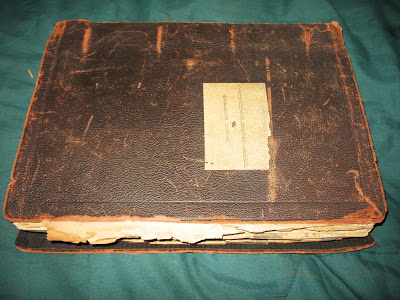 UPDATE: Nice to see this news getting picked up around the web. Here are some links: