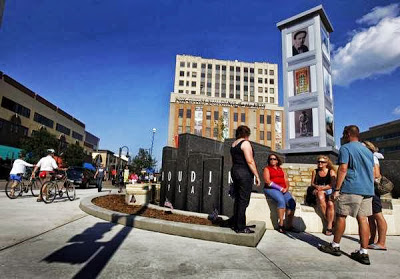 The new Houdini Plaza in Appleton Wisconsin was dedicated yesterday with an official ribbon cutting ceremony. The event saw speeches by Appleton's mayor, Tim Hanna, and Matt Carpenter of the History Museum at the Castle. There was also a straitjacket escape performed by Rondini.

Matt Carpenter said the square is not only symbolically Appleton's center, but pointed out that the Weiss family lived in a small apartment that faced Appleton Street just a few blocks away.

"He lived here, he loved this city, and built his name and reputation on the ability to evoke a sense of wonder in people," Carpenter said.

"More than 10 years in the making and here we are, with sincere thanks to Appleton for sticking with the project," said Jennifer Stephany, executive director of Appleton Downtown Inc.

The new plaza was built by The Boldt Company (yes, as in Tom Boldt). The plaza hosts three main lawn areas that surround the landmark fountain and lighted column that pays homage to Houdini's Water Torture Cell.

"His name is magical and conjures up, I think, positive images for us," said Mayor Tim Hanna.

Images and info from The Appleton Post Crescent.
Written by John Cox at 8:51 AM