Here's a July 1935 issue of The Sphinx featuring a nice cover photo of Hardeen performing The Flight of Time. This was a signature trick in Houdini's 1925-26 full evening roadshow and is said to be the last illusion he invented. To my knowledge, there is no photo of Houdini performing the effect, but I suspect this shot of Hardeen gives us an excellent idea of how Houdini staged it. Like much of Houdini's magic, we can see the apparatus was very minimal, emphasizing that there was nothing (or nowhere) to hide. 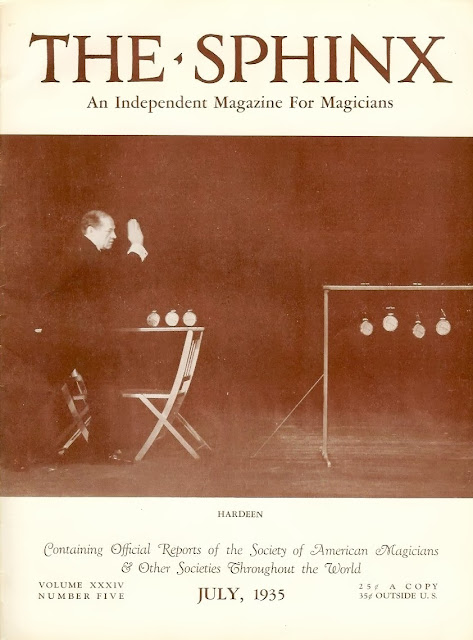 Hardeen inherited the Flight of Time from his brother and continued to perform it in his act, including during his engagement with the Olsen and Johnson hit, Hellz-a-Poppin. A review of Hardeen's show at the Belasco Theater in New York on January 21, 1945 said of the illusion: "To the audience at large, this effect was perhaps the most startling of the entire evening."

Hardeen passed the Flight of Time onto his successor, Douglas Geoffrey a.k.a. Hardeen Jr., who performed it for many years. William Rauscher received the original apparatus from Geoffrey in 1977 and also performed it for a time (there's a nice photo of him performing the effect in the November 1993 Genii). Rauscher penned an article about the effect in Perennial Mystics (Vol. 11) in which he stated:

"Geoffrey personally taught me the method of performing the effect. It was a temperamental pieces of apparatus and needed a great deal of work. There were times when it failed. According to stories by Geoffrey, it also failed upon occasion even for Houdini. Houdini would simply say "Take it away!" Even though there were incidents of failure, Houdini considered the trick a winner."


In 2011 one of the original Houdini-Hardeen Flight of Time alarm clocks sold for $1600 as part of Potter and Potter's auction of magic memorabilia from the collection of Ken Klosterman.