Is this Houdini and Bess in Laurel Canyon? 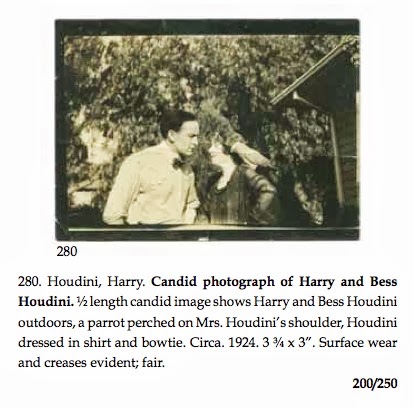 This intriguing candid photo of Harry and Bess Houdini will be auctioned by Potter & Potter this Saturday, July 27, as part of their Summer Shelf Sale. The auction includes almost 1000 collectible and contemporary magic books, as well as Herrmann, Kellar, and Houdini memorabilia, including a nice Challenge poster.

This photo excites me for several reasons. First, I've never seen it. Also, you gotta love the parrot on Bessie's shoulder. (Possibly "Laura" or "Pat Houdini". See: Houdini's pets.) But it's the location of this shot that has me most intrigued.

The catalog listing says circa 1924, but the auction house tells me that's just a guesstimate. To my eye that looks like Houdini with his black-dyed silent movie hair. He also appears dressed as he was in his Jesse L. Lasky "Extreme Houdini" publicity photos. That means this could be Houdini and Bess in Hollywood in 1919 while he was making The Grim Game (the auction house has now changed the date on the online listing to 1919).

So if this is Hollywood at that time, is it possible that this is the first and only shot of Houdini and Bess at their rented bungalow in Laurel Canyon? Could this be the "smoking gun evidence" that I spoke about in my lengthy post about the famous "Houdini Estate" last year? Those trees do look a lot like Laurel Canyon to me (I used to live there), and the house on the right does look to be in the style of a canyon home of the time.

Unfortunately, the consignor of this pic wishes to remain anonymous, so no clues where this photo came from. If only that parrot could talk.

Potter & Potter's Summer Shelf Sale auction takes place on July 27, 2013. The auction catalog can be downloaded as a PDF from the Potter & Potter website.

Thanks to Adam Steinfeld for the find and Gabe Fajuri for the auction info.

UPDATE: The photo sold for $960. See: Houdini Challenge poster and other rarities sell at Potter & Potter.
Written by John Cox at 10:12 AM