Who knew The Handcuff King enjoyed himself an occasional bit of verse? This book of Poetical Works by Felicia Hemans recently sold on eBay for $495. The book was owned by Houdini who inscribed it as "bot" in 1917. 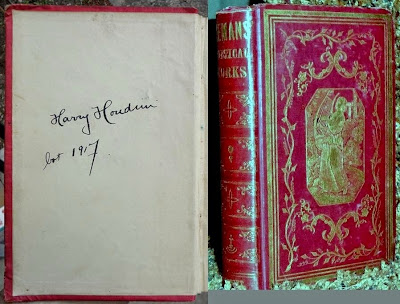 Felicia Hemans was an English poet born in Liverpool in 1793. According to Wikipedia, "to many readers she offered a woman's voice confiding a woman's trials; to others a lyricism apparently consonant with Victorian chauvinism and sentimentality. Her poetry was considered morally exemplary, and was often assigned to schoolchildren. As a result, Hemans came to be seen a poet for children rather than taken seriously on the basis of her entire body of work. However, Hemans' critical reputation has been re-examined in recent years and her work has resumed a role in standard anthologies and literary studies, especially in the U. S."

Hemans' works appeared in nineteen individual books during her lifetime. After her death in 1835 they were republished widely, usually as collections, like this one.

Hemans Poetical Works was published by Leavitt & Company, New York, in 1851. According to a second inscription, the book was presented to the Ernest E. Ford collection by Clinton Burgess in 1927. Houdini edited and published Burgess' book, Elliot's Last Legacy, in 1923.

And now this from my Houdini scrapbook (apologies in advance)...