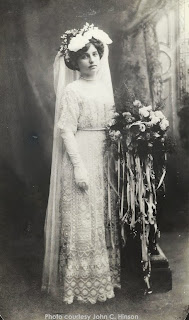 Today we have a special BONUS clip from the amazing audio interview with Bess Houdini's sister, Marie Hinson (Rahner), recorded by Stanley Palm around 1980. These excerpts come courtesy of Jon Oliver and are shared here with the blessings of John C. Hinson, the great nephew of Harry and Bess Houdini.

Here Marie remembers the generosity of her famous brother-in-law, Houdini, on stage and off. She talks about bringing her daughter Marie (Blood) to Houdini's show to do the shimmy; Houdini fondness for the shirts she made; his habit of doing magic at the dinner table; and how Houdini paid for her wedding to John Hinson on June 28, 1911.

The audio concludes with the untold story of Beatrice, the daughter of Bess's sister, Stella, who suffered from polio. This is not something that has ever appeared in any Houdini book and is a true testament to just how generous Houdini could be with his extended family. But I'll let Marie tell you all about it herself. Enjoy.

Speaking of generosity, a very big THANK YOU to Jon Oliver and Stanley Palm for making this possible. Also thanks to John C. Hinson and the Hinson family for allowing me to share these extraordinary memories from an extraordinary lady.