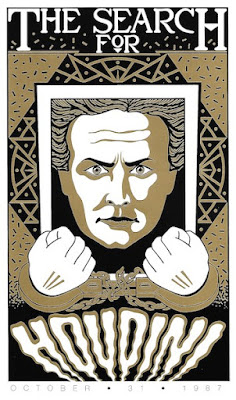 After Geraldo Rivera opened Al Capone's vault on live TV in April of 1986 (and found nothing), there was a brief explosion of "Live" television events that hoped to capture some of the ratings magic enjoyed by the Capone show. One of these was The Search for Houdini, a two-hour magic variety show and seance created by Dick Mincer and Ken Ehrlich. It was broadcast "Live from Los Angeles" on Halloween 1987.

The show was hosted by William Shatner, who made the much-hyped broadcast somewhat of a debacle with unwelcome ad-libs, flubs, and a general attitude of ridicule toward the evening's proceedings. Nevertheless, there are some highlights, such as a terrific comedic "Tribute to Houdini" performed by Penn & Teller; an eerie buried alive escape by Steve Shawn; James Randi's bizarre hospital bed bound participation in the seance (Joe Fox tells me this was all an act); and Charlotte Pendragon's famous wardrobe malfunction during Metamorphosis, which Shatner made certain did not go unnoticed.

The seance itself was treated seriously, at least by the table participants, as it was Sidney Radner's Official Houdini Seance for that year. Houdini failed to appear (can you blame him?), however the spirit of Houdini must have gotten into William Shatner, who in 1992 co-authored Believe, a "novel of psychic adventure" featuring Houdini and Sir Arthur Conan Doyle. 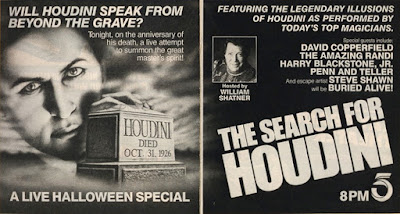 You can view Penn & Teller's segment from The Search for Houdini below. This has everything that makes Penn & Teller my favorite magic act, then and now.

UPDATE: Was there a paranormal occurrence during the live 1987 Houdini seance?
Written by John Cox at 12:56 PM