A charming new children's book with a nice Houdini hook has been released for the Amazon Kindle. Below is cover art and a plot description for Piper Houdini: Apprentice of Coney Island by Glenn Herdling. 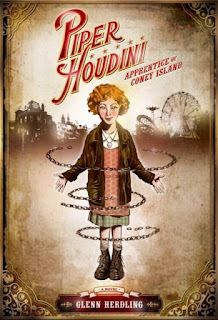 When she wasn’t being shunted from one foster home to the next, Piper Weiss spent the first twelve years of her life in an orphanage. But everything changes when a dark stranger shows up claiming to be her father. Things get even weirder when Piper is taken to live with her uncle, who happens to be the world-famous magician and escape artist, Harry Houdini. And Houdini is not at all pleased about having a curious twelve-year-old running around his home.

Piper attends school, gets detention on her first day, and meets some friends who will help her unravel the clues to her mysterious past. But something sinister and powerful has been unleashed in New York, an evil force hell-bent on bringing about the Apocalypse. Sideshow freaks are being murdered and it all seems to be leading to a dark ritual started twelve years earlier—the day Piper was born. How can Piper defeat this malevolent entity when she may be the reason for its very existence?


Piper Houdini is well represented across the net with an official website (where you can download a free 27 page preview), Facebook, and Twitter. At the moment, the book is only available as an eBook with no immediate plans for a print edition.

Purchase Piper Houdini: Apprentice of Coney Island for the Kindle at Amazon.com (U.S.) and Amazon.co.uk (UK).
Written by John Cox at 7:22 AM