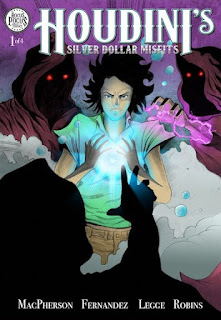 MacPherson explained the evolution of his idea in an interview at FreakSugar:

"I wrote a book called Kid Houdini and the Silver Dollar Misfits that was published in 2008. It received a lot of Hollywood attention, but it eventually fell apart because it was labeled a “period piece.” In the ensuing years I wondered: how can I bring this story into the 21st century? So I began piecing together the story bone by bone, if you will, until I had written the entire first story. Obviously the characters and premises are quite different from Kid Houdini, but both involve mysteries, magic, and Harry Houdini. In one way or another."


I can't quite tell if this is going to be a printed comic or online only. But at the moment, I know it can be found at comiXology and Amazon.com.