A magical wedding in Houdiniland 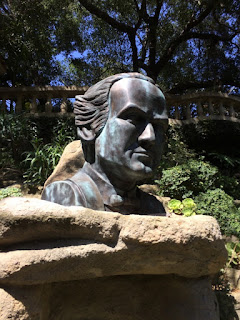 On Wednesday I had the great pleasure of attending the wedding of Craig Dickens and Elizabeth Del Sol at the Houdini Estate in Laurel Canyon. Craig and Elizabeth are both magicians and Magic Castle members (Craig is also an illusion builder), and the spirit of Houdini was ever present.

The bride herself appeared via a tabletop illusion. The ceremony was officiated by magician Larry Wilson, who worked Houdini into his script. ("He was one of the great romantics of the 20th century.") I told Magic Castle librarian Lisa Cousins, who had kindly invited me to be her plus one, that it's a good thing I'm so into Houdini...because he sure seems to come up a lot!

There were no shortage of magic luminaries in attendance, including: Mike Caveney, Misty Lee, Steve Valentine, Bill Goodwin, and my table mate, George Tovar, himself a Houdini buff since childhood (his entry point: Williams & Epstein).

I could go on about how lovely the wedding was and what a beautiful couple Craig and Elizabeth make (I guess I now cry at weddings), but this is a Houdini blog, so I'll focus my attention on the Houdini Estate itself.

I've written at length about the house history, and I've experienced the dramatic revival of the property first hand. Still, it's always exciting to get back inside and see what's new. This time I was thrilled to see that owner José Luis Nazar has added yet more Houdini tributes, statues, signage, and flowers! 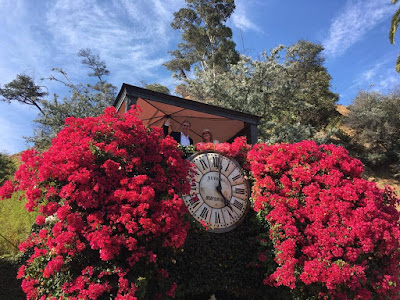 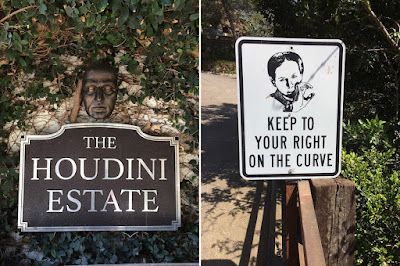 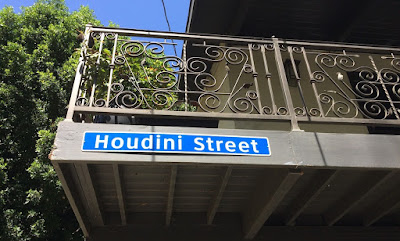 Three new additions, created by the groom Craig Dickens, were getting their event debut on this day. These are three magic illusion photo ops. One allows you to assume Houdini's famous 1903 photo in heavy chains (sans loincloth, although I'm sure that can be arranged!). I won't spoil the illusion by explaining how it's done, but it's pretty clever, and I heard mention that David Copperfield had commissioned one. There's also a levitation and a head on a platter photo ops. Great fun. 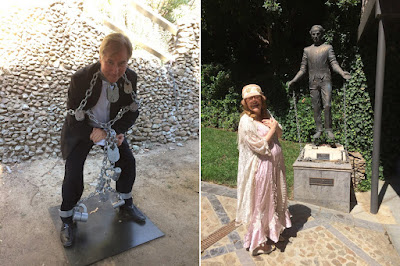 Under the ownership of José Luis Nazar, this one time ruin really has become a Houdiniland, and I mean that as a compliment. It's a verifiable fairy tale world of Houdiniana, whimsical and beautiful. And even if we can't (yet) put Houdini himself in the house, it has now earned the right to the name "The Houdini Estate" for its joyous celebration of Houdini and his connection, both real and mythic, to Hollywood.

Congratulations to Craig and Elizabeth, and thank you Lisa Cousins for inviting me to join the celebration. It was a truly magical event. 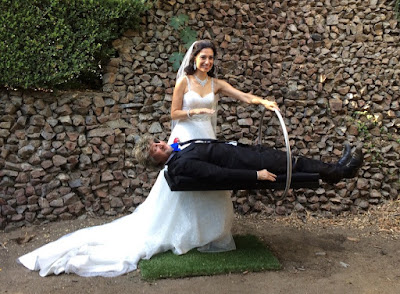 If you are interested in having a wedding or event at the Houdini Estate, you can find details at the official website. Also check out the magic websites of bride and groom Craig Dickens and Elizabeth Del Sol.