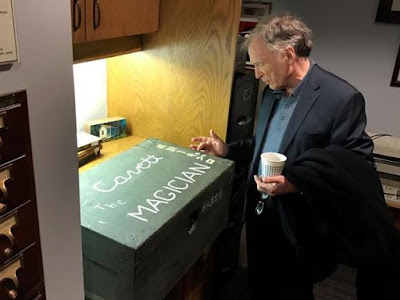 A profile of Dick Cavett in The New York Times reveals that the famous talk show host now lives in the former home of Houdini's brother, Leopold Weiss. The Ridgefield Connecticut estate is known as Sunset Hall and is listed on the National Register of Historic Places.

The house, a 1912 Georgian, towers atop a leafy hilltop past an ornate iron gate. Mr. Cavett, who never knew a name not worth dropping, seems pleased at its celebrity lineage: the film and television star Robert Vaughn and Harry Houdini’s brother both lived there. Houdini, he said, “used to practice his underwater escapes in manacles and chains in the pool,” a fact that delights him, because he was an avid magician as a child.


Houdini and Leopold had a famous falling out in 1917. Leo eventually sold the house and ended his days in an apartmet in Inwood, New York.

UPDATE: Don't tell Dick Cavett, but it sounds like Houdini wouldn't have been caught dead in this house. And it sounds like Leo wasn't all that welcome either! Read: Guest blog: Leopold and Sady Weiss: Why Houdini Wasn’t Happy.