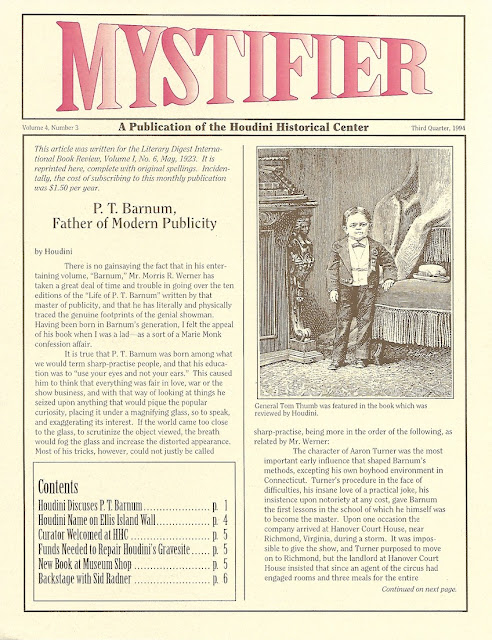 The Third Quarter 1994 Mystifier features a lengthy review of the biography Barnum by Morris R. Werner, written by Houdini for the May 1923 Literary Digest International Book Review. It's pretty interesting to hear Houdini discuss his great predecessor in self-promotion. He even says that he read Barnum's autobiography as a youth. Here's a taste:

It would pay every one, in an educational way, to read Barnum's "Life" and then pick up Mr. Werner's book and see how hard the latter tries to show us Mr. Barnum as he really was. He does it very ably, but there is one curious oversight: he seems to have forgotten entirely the publicity promoters of Barnum. I was fortunate enough to become acquainted with Kit Clark, one of the original "abusive bill writers." No one man, without lieutenants, I believe, has every projected a publicity campaign to equal that which Clark carried through for Jenny Lind. Outside of the presidential campaigns, in my humble estimation, the Jenny Lind exploitation will rank with the greatest ever seen in this country.


By the way, Houdini's copy of the Werner book, inscribed to Houdini by the author, is today in the Harry Ransom Center collection. [see update below]

The newsletter continues with the news that "Harry Houdini and Family" will be added to the Ellis Island "Wall of Honor" in New York, thanks to the sponsorship of HHC member Paul Rosen. Rosen said he elected to use the name Houdini instead of Ehrich Weiss as Houdini "is how the public knows him." The newsletter says the name is expected to be added to the Wall in 1995. (It's worth noting that the Weiss family likely came through Castle Garden at the Battery, not Ellis Island.)

Benjamin Filene is announced as the new curator of the Houdini Historical Center. Filene says he's "eager to immerse himself in Houdini lore." A fundraising campaign for repairs to Houdini's grave is also announced. The grave site was vandalized on May 25, 1994.

In "Backstage with Sid Radner," Sid welcomes to the HHC Raymond Corbin, a great proponent of the Spook Show genre. "It's too bad the new generation of magicians and the public can't experience the thrilling piece of Americana that was the midnight spook show," says Sid. He also thanks Arthur Moses and the late Manny Weltman for uncovering the Houdini Barnum review.

Sid then reports that he, David Baldwin, and Henry Muller of the Houdini Magical Hall of Fame have acquired the Walter B. Gibson/Great Raymond Collection. He says it took nine people an entire weekend to clear it out of the barn in which it had been stored. Among the treasures is an original Miss Undina poster, said to have been the very poster used by Houdini in his 1912 trial against her. Sid promises more about the collection in a future issue of Mystifier.

UPDATE: Our friend Eric Colleary of the Harry Ransom Center has tweeted images of the book itself. Dated on Houdini's birthday! Check it out here.