'Houdini' at the Goodspeed Opera House in 1997

In 1997 a Houdini musical played the famous Goodspeed Opera House in East Haddam, Connecticut. The play featured Philip Chaffin as Houdini. David Byron attended one of the early performaces and gave the play a thorough review, which last year he posted to his website Baroque Potion. Here's a taste: 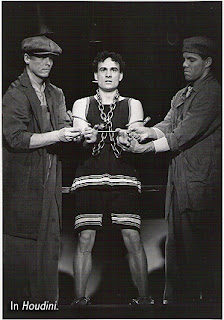 I am pleased and surprised to say that Houdini works. The dramatic hinge of the story is an apparent love triangle between Bess (correctly depicted as a Coney Island showgirl), Theo ("I saw her first, Harry"– also apparently correct), and Harry ("I'm not a clown!") Houdini. This intrigue plays out against the thematic backdrop of their descent into dime-museum poverty in the 1890s and their rise to fame and glory under the guiding hand of impresario Martin Beck, played with pizzazz by a flashy P. J. Benjamin.


That year Sidney Radner, who was an enthusiastic supporter of the musical, held his Official Houdini Seance on the stage of the Goodspeed.

Despite hopes that Houdini would travel to Broadway, it appears it only played this one engagement.