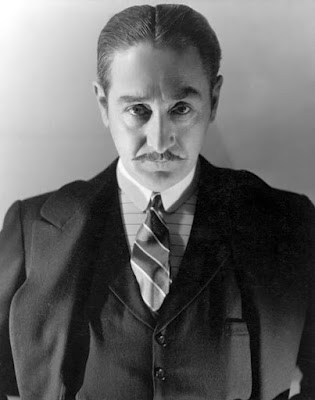 In 1932, RKO was going to make a movie based on Houdini's life called Now You See It, written by Houdini's friend and fellow spirit buster Fulton Oursler. It was not strictly a biopic as the main character was called Harry Pinetti. But events in Pinetti's life, such as becoming trapped under the ice of frozen lake and exposing fake spirit mediums, would leave little doubt in anyone's mind that this was the story of Houdini.

I covered the development of Now You See It at length in 2010. In fact, it was my first real research scoop here on WILD ABOUT HARRY. But recently I found the following item in the November 12, 1932 issue of Hollywood Filmgraph that shows the movie came even closer to being made than I had thought. In that year the studio signed actor Adolphe Menjou to play Pinetti/Houdini. 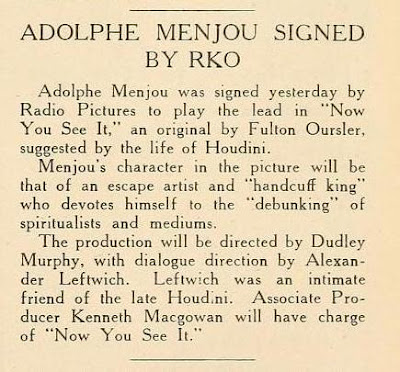 It was later reported that Menjou was being coached in magic by Walter Baker, who had originated what became the famous Tarbell Course in Magic. When the Harrisburg Telegraph picked up the news on December 28, they recalled their days with the real Houdini. 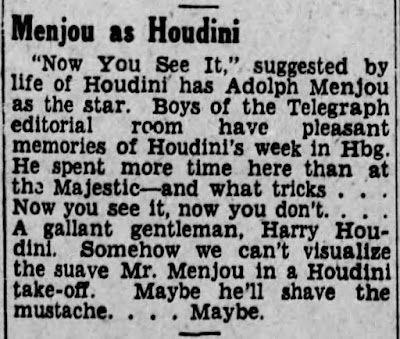 Now You See It was never made and marked the first of many Houdini projects developed and then abandoned by Hollywood. That finally changed in 1953 when Paramount released the classic Houdini with Tony Curtis in the lead.

Adolphe Menjou had a long career, appearing in both silent and sound films such as Valentino's The Sheik, The Front Page (in which he was nominated for an Oscar), and the original A Star Is Born with Janet Gaynor. He was also a stanch Republican who cooperated with Senator Joseph McCarthy's House on Un-American Activities Committee in the 1950s. Menjou died on October 29, 1963.

For more on Now You See It check out my two-part posts below.