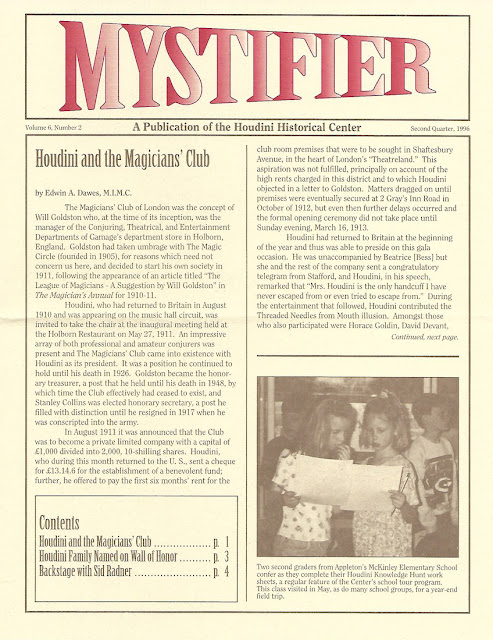 The Second Quarter 1996 Mystifier is made up largely of a very fine article by Edwin A. Dawes about Houdini and The Magicians' Club in England. Houdini was president of the club from its founding in 1911 to his death. The article is a treasure trove of information about the various Magicians' Club events that Houdini attended, including this gem about a 1920 dinner honoring Houdini officiated by The Great Raymond.

Will Goldston claimed in his book Sensational Tales of Mystery Men (1929) that Houdini detested Maurice Raymond and, when he learned that Raymond was the occupy the Chair at this particular function, at first refused to accept any presentation from him. It took Goldston's powers of persuasion to get Houdini to allow Raymond to officiate. Even then Goldston had to reprint the tickets to placate Houdini who insisted that "The Great Raymond" be replaced with "M.F. Raymond" because "he's not great at all."

According to Milbourne Christopher in Houdini The Untold Story (1969), the antipathy had been aroused years previously when Raymond ordered a Water Can escape from Ornum, a British manufacture, without seeking Houdini's permission. However, Raymond apologized and at the dinner presumably made ample amends by declaiming in his speech, "Harry Houdini was born, as I was, under the Stars and Stripes. He saw them a little ahead of me and he had been ahead of me ever since."


The newsletter continues with a photo of the newly installed "Harry Houdini Family" inscription on the Wall of Honor at Ellis Island in New York City. Getting Houdini's name on the wall was due to the efforts of HHC member Paul Rosen. Among the "New Members" are Lance Burton and Dean Gunnarson.

The newsletter only runs four pages this time, but tipped into each member's issue was a letter from HHC Executive Director Steven M. Wilson announcing that the Mind Over Magic exhibition, announced in the previous issue, is being postponed (indefinitely, as it would turn out). Wilson explains that "concerns began to surface about the many directions the project could take, and whether the exhibit was right for our audiences needs."

Sid Radner starts off his "Backstage" column with an amusing look at people he has encountered who have legally changed their names to "Harry Houdini." [We have a regular reader here named "Harry Houdini." Is he one of the folks Sid mentions?] Sid then announces that Houdini Comes To America by Ronald J. Hilgert will be the first HHC publication and will be limited to 300 signed copies.

Sid finishes with a promise to reveal details on Ken Silverman's upcoming book and the recently completed Houdini documentary in the next issues. He signs off with: "Houdini Lives!"