While working on my Houdini Chronology, I rely a lot on old newspaper ads that provide many dates and places where Houdini appeared. But I've learned I have to be careful. Below is an ad for what appears to be Houdini at the Garden Theater in Buffalo during the week of May 11, 1907. I had even added this to the chronology. But then I had a closer look. 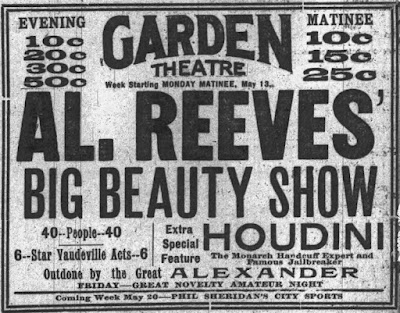 This is actually an appearance by The Great Alexander (presumably not the Alexander). But the placement of the text and the wording deliberately encourages a misreading that this is Houdini himself. And this isn't the only example of deceptive billing that I've come across. I've also noticed some who have attempted chronologies before me have have fallen victim to one of these tricky Houdini imitators.
Written by John Cox at 10:02 AM